Autogefuhl Checks Out The Fisker Ocean In Europe 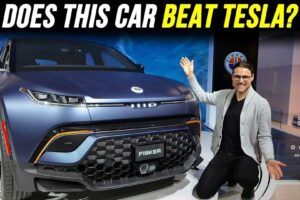 The Fisker Ocean seems to offer it all: style, range, performance and affordability, and even though it comes from a company with a bad track record, many people are understandably excited about it. And after previously announcing specs and price for the US market, Fisker has now detailed the Ocean for the European market, just as the model made its official Old Continent debut at the 2022 Mobile World Congress held in Barcelona.

Pricing for Europe has already been announced – the base Ocean will start at €41,900 in Spain and at £34,990 in the UK. These prices include VAT but they don’t include incentives, so the price paid by the end user will be lower and it will be lowest in European countries with the highest incentives.

But what do European automotive journalists think of the Ocean? Well, they had the chance to see and touch it in Barcelona now and on first impressions, they seem to like it. Autogefuhl’s Thomas seems to like it too, as he not only takes a very detailed (static for now) look at the vehicle, but he also talks to its designer and the founder of the company, Henrik Fisker.

One of the most important points he mentions in the video, though, is the fact that Fisker made a good choice option to have the Ocean be built by a company that specializes in outsourced projects – Magna Steyr, in Austria. This company has vast experience and resources and it builds vehicles for some very important automakers.

Fiskers were plagued with many quality and reliability issues in the past, but now by not building the cars itself, the company is hoping to offer a vehicle that is at least as good as rivals when it comes to dependability. The Ocean is expected to go on sale in Europe later on in 2022.