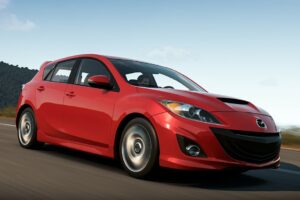 Mazda has just thrown its weight behind an all-new powertrain that sends out over 300 hp to an equally new platform’s rear wheels—and that BMW-like combo is appearing on the automaker’s latest family crossovers such as the new Mazda CX-60 and upcoming CX-70. The setup’s performance promise might have you reminiscing about the glory days of Mazdaspeed, Mazda’s performance division that turned out zestier versions of the Miata, Mazda 3, and Mazda 6 here in the U.S. Allow us to pop your balloons, because the automaker has no plans to bring back its performance-branded models, according to the latest reports from Australia.

Alastair Doak, Mazda Australia’s marketing manager in the region, had to fight off questions from Which Car? regarding the return of Mazdaspeed, or MPS as it was known in Australia, which fans have been counting on for years. We thought the latest Mazda 3 hatchback, now with a turbo, was a prime candidate for the Mazdaspeed treatment when it debuted a few years back, but our hopes for MPS Zoom Zooms were dashed back then, too.

“It’d be nice, but the volume realistically would be pretty small for it,” Doak admitted to Which Car?. “We have a GT spec and SP GTs. We think our cars ride and handle pretty well anyway, and I think we back ourselves in with the look of those kind of vehicles,” he added.

Doak also suggested we have nothing to worry about regarding performance from the future Mazda lineup: “If we do step up with even more performance than we’re offering currently, then I think we’ll be doing okay, and we’ll have RWD architecture again as well, which will set us apart.” Doak also says the “spirit is still there” regarding the old Mazdaspeed offerings.

At the time, we called the 2006 Mazdaspeed 3’s performance “imposing,” offering 263 horsepower at 5,500 rpm and 280 lb-ft of torque at 3,000 rpm with a zero to 60 mph time of six seconds flat, comparable to a contemporary BMW or Audi. It certainly fits the bang for your buck, burning-hot hatch category, and featured the same 2.3-liter turbo I-4 engine and six-speed manual transmission as the other Mazdaspeed model, the Mazdaspeed 6 sedan, though the 3 drove with more purpose.

But the news that Mazdaspeed models aren’t coming back isn’t surprising, just a sad confirmation. Mazda has been a bit of a roller-coaster as of recently. The new Mazda 3 is great, but it’s been bumpy ever since, with the CX-30 crossover garnering mixed reactions and the 6 sedan going away entirely here in the U.S. Recent rumors that an all-new Mazda 6 was just around the corner seem to be false, which was already disappointing.

Mazda’s diesel program stalled in the U.S. after years of delays, its new Skyactiv-X engine technology has yet to find a place stateside like promised despite launching in other markets, and patents show Mazda is working on new rotary engines for range-extending hybrids that could be a dead-end, giving the push for full-electrification in the market. Its new MX-30 EV, with a limited 100-mile estimated range, just doesn’t stack up to the competition. To ask Mazda for yet another passion project that pulls on already-limited resources, like a new Mazdaspeed anything, may just be asking too much.

Instead the brand is laser-focused on rolling out a slate of new crossovers like the new CX-60 in Europe, with plans for a slightly larger CX-70 version to be sold in the U.S. soon. Both offer that powerful new rear-wheel drive powertrain mentioned before, so we do have to credit Mazda for trying where it still counts. The CX-60 is currently the “most powerful” road-going production car Mazda has ever made. It features a 2.5-liter I-4 gas engine with a 100-kW e-motor, plugged into a 17.8-kWh battery, good for a total output of 323 horsepower.