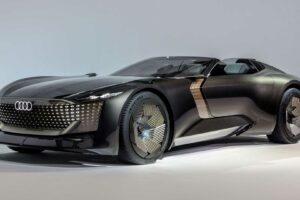 This futuristic autonomous EV is inspired by a 1937 Horch roadster.

Audi is going all-in on luxurious, performance-oriented EVs, and the brand will preview its future via three “Sphere” concept vehicles. The first of these is the Skysphere, a sleek two-seat roadster that will make its first public appearance at the 2021 Pebble Beach Concours d’Elegance. We were lucky enough to catch up with the Skysphere concept in person just before its debut, and it’s even more attractive than it appears in photos.

The Skysphere hides one neat trick underneath its stunning bodywork – it can change its wheelbase on the fly, transforming from a long, imposing grand tourer to a nimble roadster at the touch of a button. Actuators behind the front axle move the entire front clip of the car rearward, shortening the wheelbase by nearly 10 inches in its transition between the so-called “GT” and “Sport” modes. Notably, the Skysphere also theoretically offers Level 4 autonomy, so in GT mode, the steering wheel and pedals retract under the dashboard to create an open and airy cockpit for the lucky two passengers.

Somehow, the Skysphere looks great in either configuration. The concept is inspired by the 1937 Horch roadster that won Best of Show at Pebble in 2009, with length, width, and rear-biased proportions that are a dead lock for the classic car. You’ll remember that Horch was one of the four brands (along with Audi, DKW, and Wanderer) that formed Auto Union, the company that was Audi’s immediate predecessor. However, in spite of that heritage (and the similar proportions), the low-slung Skysphere is no retro redux.

An Audi Singleframe motif dominates the front end, with an illuminated four-rings badge protruding from the panel. Dozens of LED accents serve as indicator lights and do a fun animated dance upon approach and departure. Narrow headlights with triangular lighting elements glower at the road ahead, previewing the next generation of Audi lighting design. Peaking, angular front and rear fenders bulge from the bodysides, recalling that other famous Audi, the Quattro of the 1980s. The streamline-style rear deck comes to a point a la racing cars of a century ago, but dozens of ruby-red LEDs root the backside in the modern era.

In extended GT mode, there’s an attractive rose-toned panel with triangular accents just ahead of the passenger cabin, coordinating with the slick trunk panel behind the seats. The Skysphere also rides slightly higher in this configuration thanks to four-corner air suspension that uses GPS and road preview to provide a cushy, soft ride. In Sport mode, the vehicle lowers and the front end retracts to cover up that aforementioned panel. Inside, the steering wheel and dashboard present themselves to the driver, with rear-axle steering coming online to provide a sportier and more involving driving experience.

Audi claims the Skysphere will sprint to 60 miles per hour in just under 4 seconds thanks to a rear-mounted electric motor with 624 horsepower (465 kilowatts). An 80-kilowatt-hour battery resides behind the seats and in the vehicle’s center console, giving the Skysphere a theoretical range of 310 miles (500 kilometers) on the generous WLTP cycle. Two sets of custom-designed golf clubs (Pebble Beach is a golf course, remember) reside in the spacious frunk, while a pair of suitcases fit on the rear deck.

Part and parcel to that experience is the commodious cockpit. Trimmed from wall to wall in eco-friendly Agave Blue microfiber and vegan leather, the interior pays homage the design center in Malibu, California, that created the Skysphere concept. Sustainably sourced Eucalyptus trim appears on the door panels, as well as chic, Art Deco–inspired metallic accents that recall that old Horch. A widescreen panel takes the place of a conventional dashboard, two-thirds of which are dedicated to the driver’s instrument cluster and infotainment. Redundant audio and climate controls appear on the door panels, a surprising and delightful touch.

The Audi Skysphere, along with the forthcoming flagship Grandsphere and versatile Urbansphere, preview Audi’s future styling and technology – in fact, the company claims the Grandsphere is a production-intent concept of a vehicle that will appear by mid-decade. Some elements of the Skysphere are likely rooted in show-car fancy (we wouldn’t expect to see that variable wheelbase, for example), but if the future of Audi is half as attractive as this two-seat roadster, we’re all in for a treat. 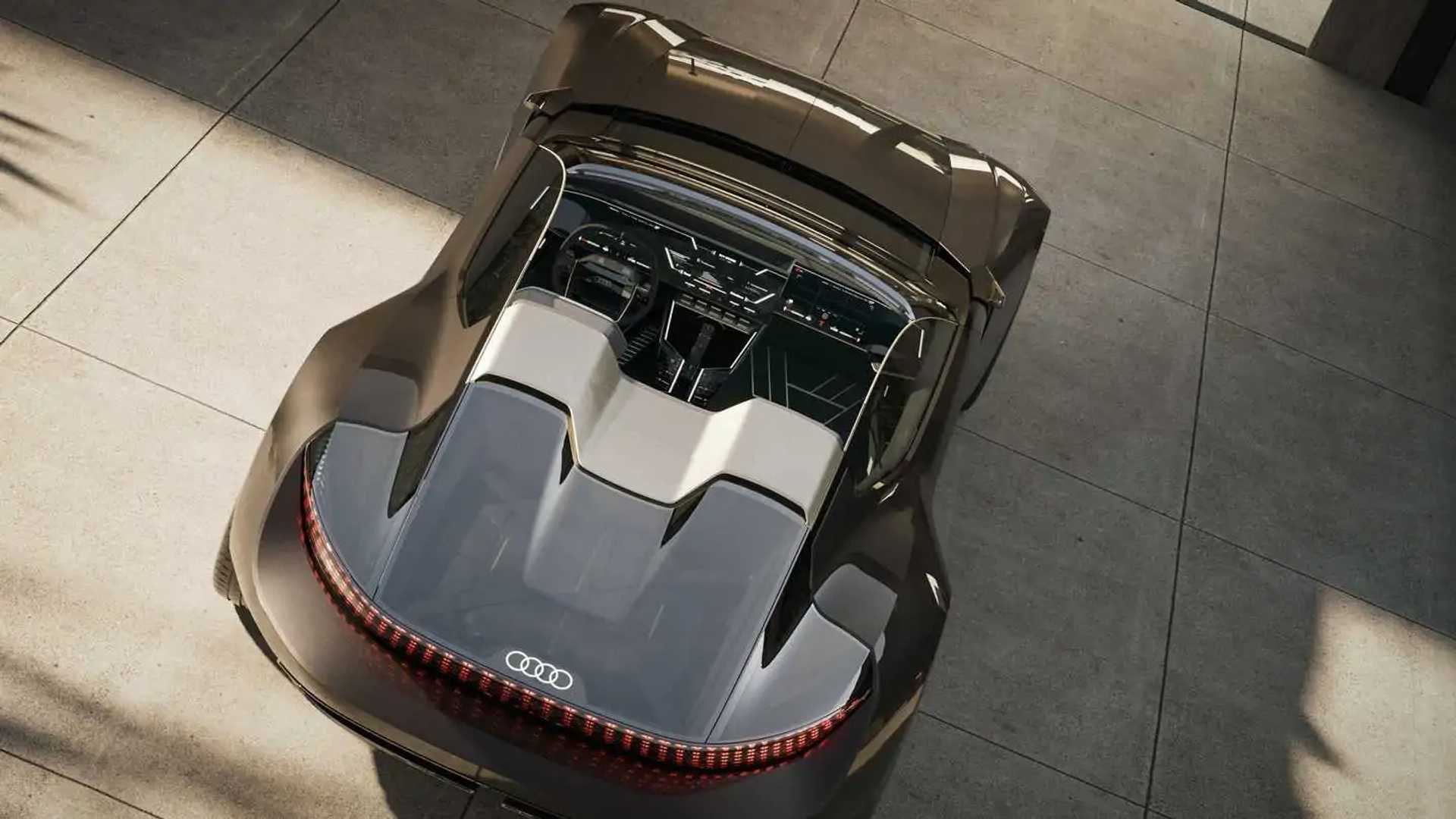 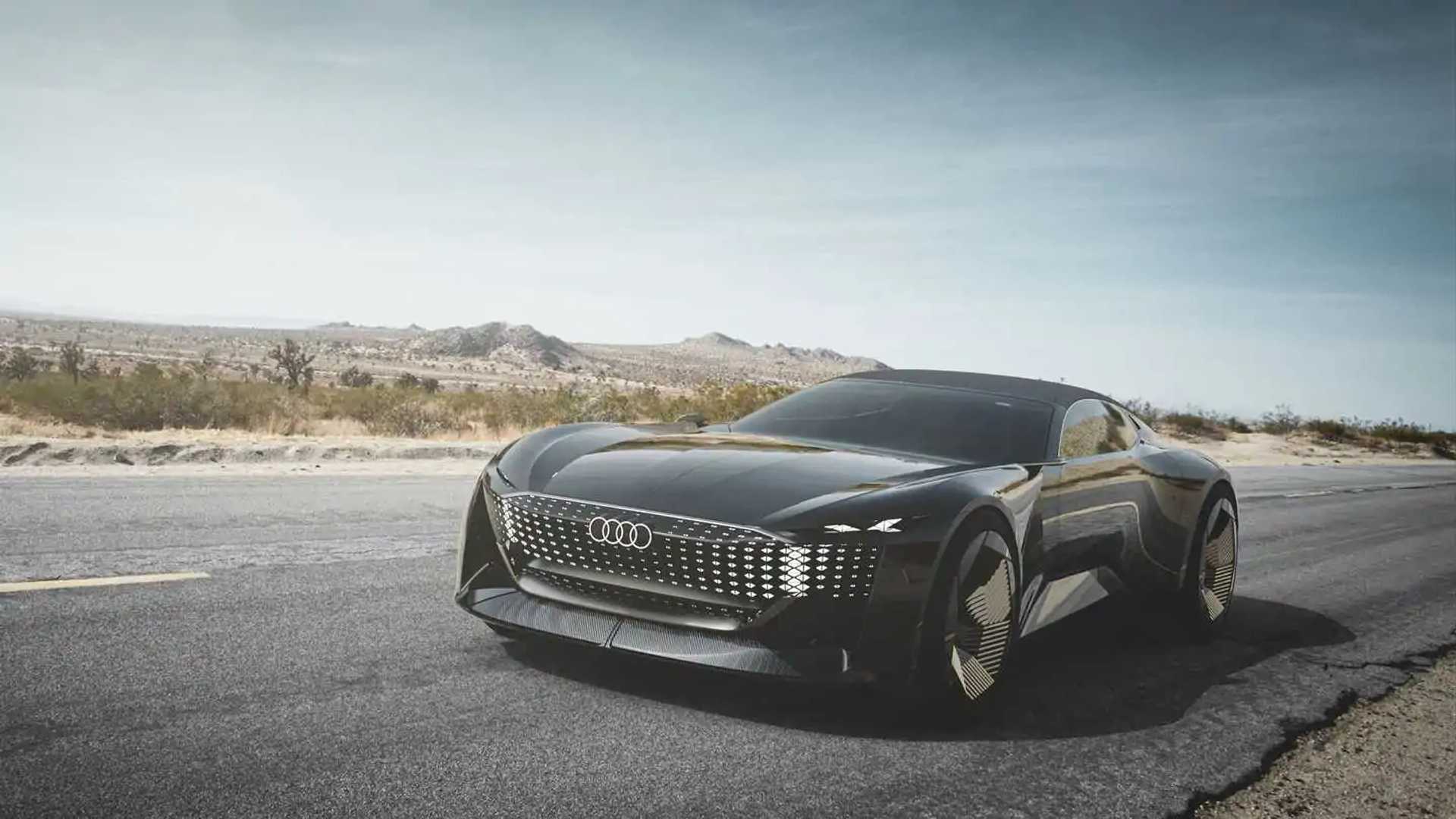 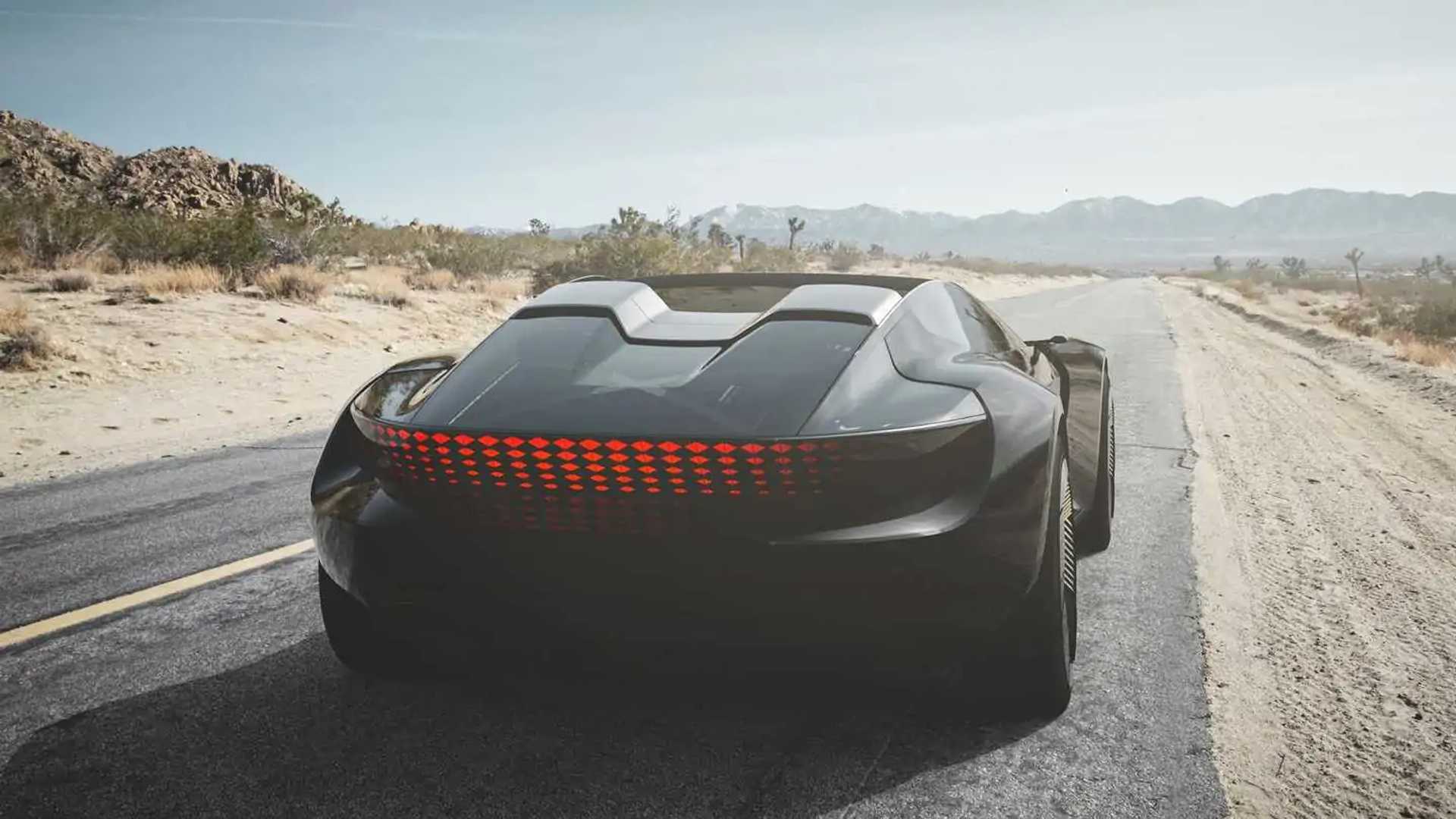 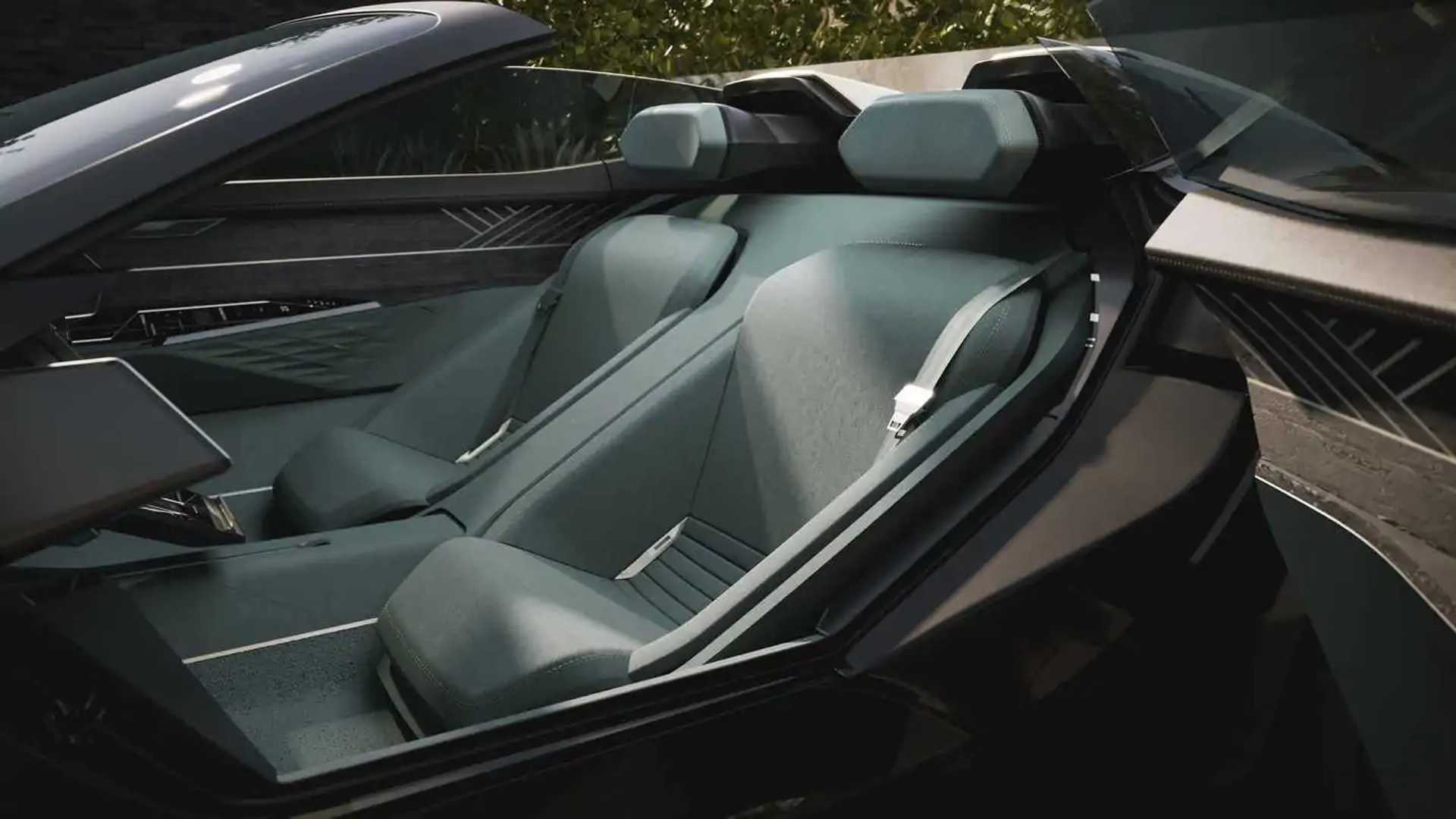 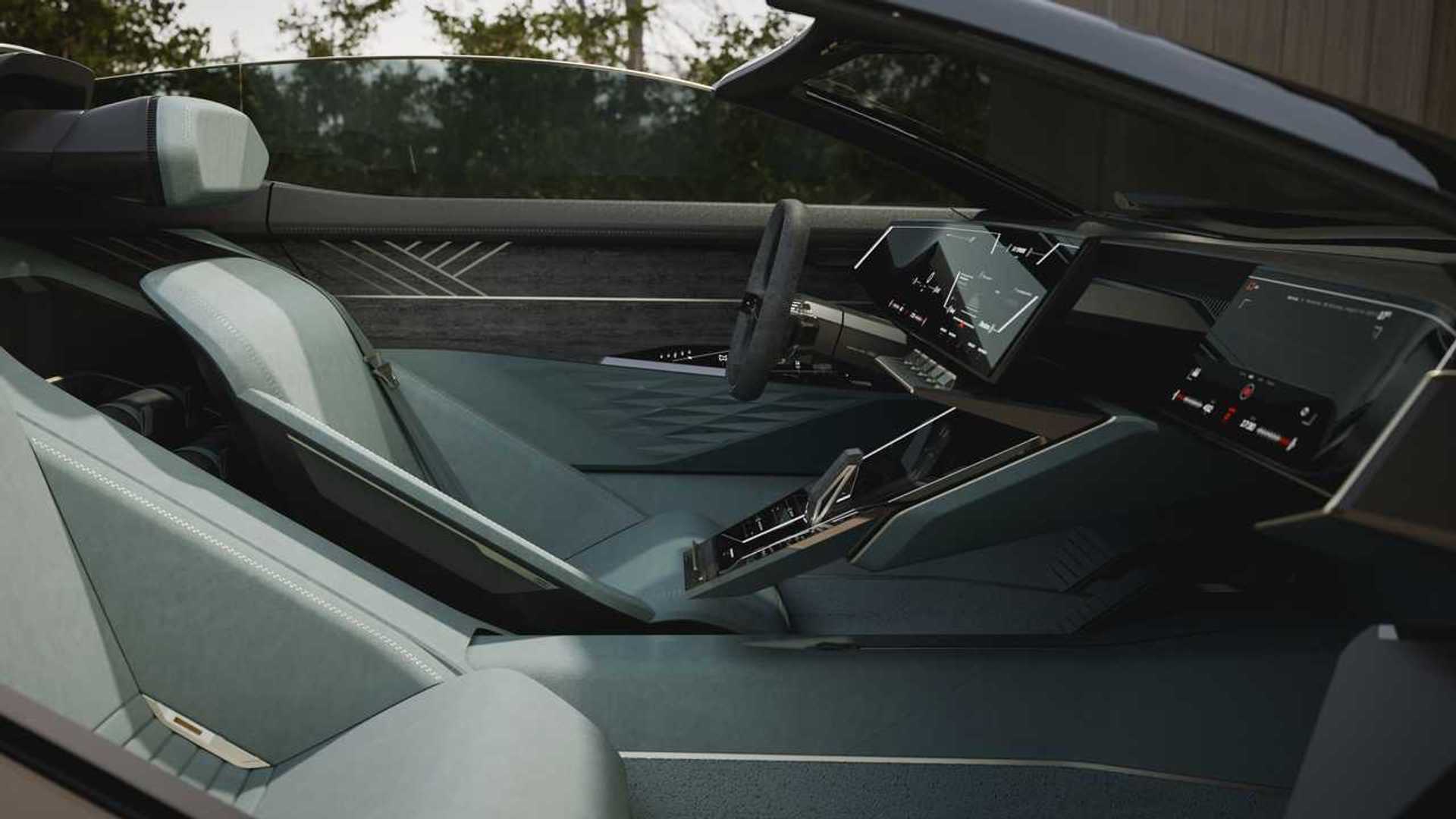 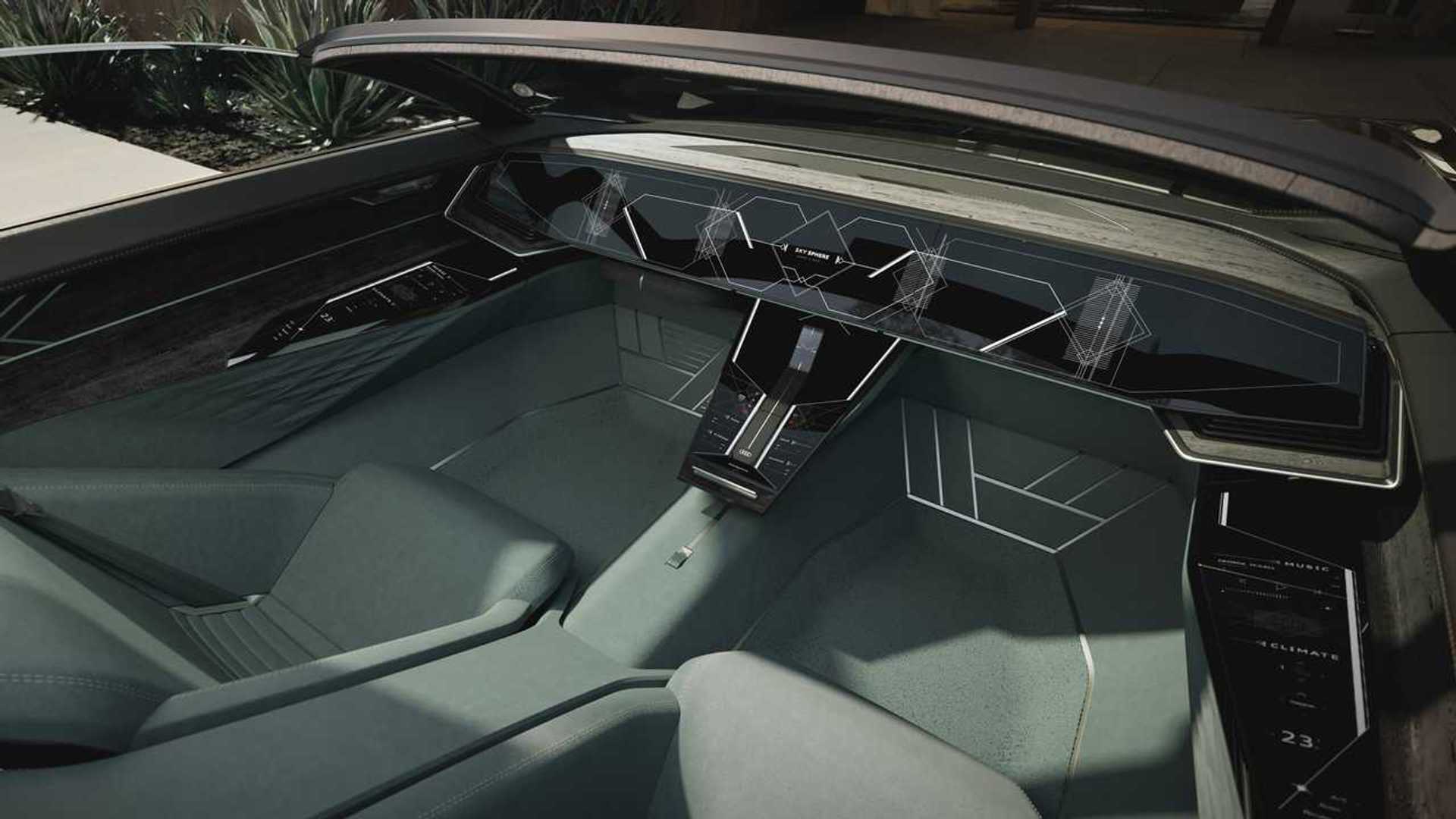 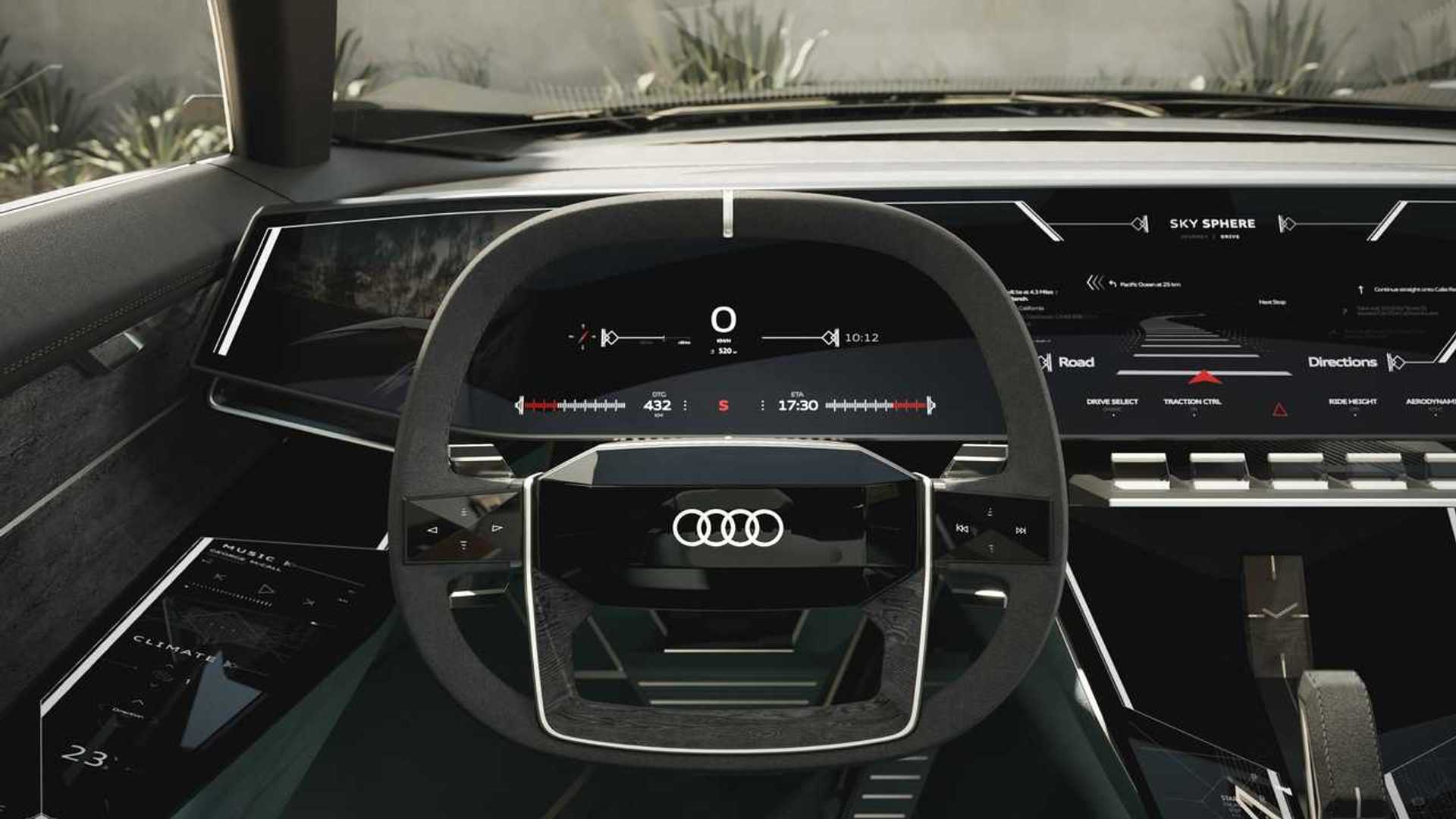