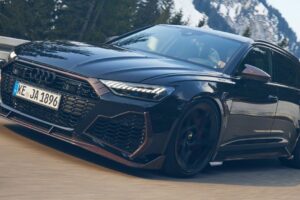 ABT Sportsline recently announced the Johann Abt Signature Edition, a 64-unit exclusive model based on the C8 Audi RS6 Avant. It’s dubbed as the most exclusive ABT model of all time, each featuring an integrated time capsule on the centre console that contains a fragment of the original anvil that belonged to founder Johann Abt. All 64 examples have been snapped up, less than a week after the car went on sale.

Created to celebrate the company’s 125th anniversary, the special hand-built model (six units a month at the Bavarian factory) gets custom turbochargers, new ECU and larger intercoolers to boost output to 800 PS and 980 Nm (can be raised to 1,000 Nm). This is a staggering 200 PS and 180 Nm more than what the factory 4.0 litre V8 TFSI engine makes, and the gains are impressive to say the least. There’s also an additional oil cooling system to help keep temperatures down, ABT height-adjustable suspension springs, uprated anti-roll bars, custom front intakes to cool the brakes, and an aero package with a turbulence inducer that generates 150 kg of extra downforce on the rear axle. The last component has been tested in the wind tunnel, evidenced in one of the images below.

On the visual side of things, the car gets Signature Carbon Red trims inside and out, which are essentially carbon-fibre parts that are uniquely infused with red metallic thread. The front lip, rear skirt and 22-inch forged wheels (each side is 3.5 kg lighter than the standard RS6 wheels) are all made exclusively for this model. Completing the exterior are quad 102-mm matte black stainless steel exhaust finishers, and ABT halo LED projection.

Inside, you’ll find the red carbon-fibre trim on the dashboard, door and side seat panels, as well as the gear lever, shift paddles and centre armrest. The centre console gets retrofitted with a custom matte black anodised aluminium time capsule with the aforementioned anvil fragment, while the leather seats are hand-sewn with red stitching. A special plaque is fitted to the passenger dash, denoting the build number.

ABT did not reveal the pricing for the conversion, but highlighted that each car will be built according to the “One man, one vehicle” philosophy. “A motorsport mechanic will be responsible for the conversion of each individual example – a unique and exceptional event. One man, one vehicle – from start to finish,” said CEO Hans-Jürgen Abt. Sounds familiar, doesn’t it?