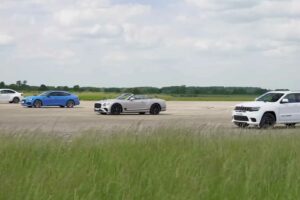 Here’s a drag race between four vehicles with comparable power outputs, but each of them is from a different segment. The competitors are an Audi RS5 Sportback sedan, Bentley Continental GT Convertible Speed, BMW M2 Competition coupe, and a Jeep Grand Cherokee Trackhawk.

In terms of specs, the Audi RS5 Sportback has a twin-turbocharged 2.9-liter V6 engine that produces 444 horsepower (331 kilowatts) and 442 pound-feet (600 Newton-meters) of torque.

Things start with a drag race. The Audi takes the lead off the line, but the Jeep isn’t too far behind. The BMW initially has a good start until the Bentley passes it. In the middle of the run, the Continental GT begins to gain ground. The big convertible scores the victory. The RS5 beats the Trackhawk by a nose. The M2 is last.

They run the same race again, and the finishing order is identical. The distance between the Audi and the Jeep at the finish line is a bit longer, though.

A third drag race has the same order again, but this time the video shows their time to cover the quarter-mile. The Continental GT Convertible Speed needs 11.7 seconds to complete the distance. The RS5 Sportback and Grand Cherokee Trackhawk both do it in 12.0 seconds. The M2 Competition is last with a time of 12.6 seconds.

The next race is from a 50-mph (80-kph) roll in comfort mode. The Jeep is not very sporty in this setting, and the other vehicles fly away from it. The Bentley scores another victory. The Audi and BMW are second and third, respectively.

They re-run this race but with each vehicle in sport mode. This time, the competition is much closer. While there isn’t as much of a gap, the order at the finish line is the same.

Finally, a braking test from 100 mph. The BMW scores its first victory. Meanwhile, the Jeep requires the longest distance to come to a stop.