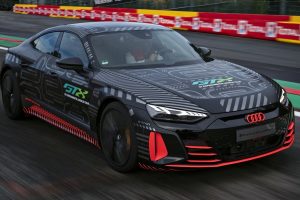 Having entered the electric SUV market with the e-tron, Audi is now mounting an offensive against cars like the Tesla Model S with the new e-tron GT. This zero-emission alternative to the A7 Sportback, due to enter production at the end of the year, has been teased a number of times, but this is the first time we’re seeing the high-performance RS e-tron GT.

This prototype is making its debut at this weekend’s 24 Hours of Spa, where it will act as a pace car for tomorrow’s race. From the outside, it appears to be identical to the standard e-tron GT, which is to say that it is near note-for-note recreation of the beautifully low-slung 2018 concept.

However, there is expected to be plenty of changes under the skin. Though it is based on the same J1 performance platform as the Porsche Taycan, it will get more power than even the most potent Taycan Turbo S, thanks to a new triple-motor set up that sees two motors being placed at the rear and one up front. Together, they will reportedly produce around 710 PS. While that’s still a bit lower than the Turbo S’ 761 PS, the latter figure is with the overboost function engaged; in everyday use, the Porsche makes “only” 625 PS (the same as the lesser Turbo model, incidentally). The Audi, then, should make even more power on overboost.

Other nuggets of potential information include a slightly larger 95 kWh lithium-ion battery, a range of around 400 km and “controlled drifting” ability. Expect some handling-oriented chassis tweaks and a zero-to-100 km/h sprint time of around or below three seconds. Just like the regular e-tron GT, the RS model will be built at the same Neckarsulm plant as the R8 supercar, which has been expanded and upgraded.