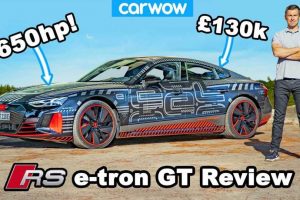 The Porsche Taycan’s Audi-badged cousin is going to be quite special and blisteringly fast in RS guise.

Audi Sport, the division responsible for the automaker’s RS-badged models, has so far not done an electric vehicle. But it is currently putting the finishing touches on its first ever, an RS version of the upcoming Audi e-tron GT electric sedan, and it’s let journalists and influencers have a go in it.

The Audi RS e-tron GT will be the most powerful and torquey variant of the model, with 600 horsepower (briefly up to 641 horsepower) and 627 pound-feet (850 Nm) of torque from its dual motor setup – the front motor makes 235 horsepower while the rear motor makes 449 horsepower. It can sprint to sixty in under 3 seconds and just like the Porsche Taycan (with which its shares the same platform), it has a two-speed transmission for the rear.

Those who have had the chance to try it out, including Carwow’s Mat Watson and Misha Charoudin, were really impressed by the performance and the looks of the vehicle. They not only got to drive the vehicle in a controlled traffic-free environment, but they were also allowed to take the prototypes out on the road.

Mat measured its performance with specialist timing gear – he recorded the RS e-tron GT as being able to sprint to sixty in 2.88 seconds and it completed the quarter-mile in 10.94 seconds at almost 130 mph (210 km/h). We still didn’t get a look at the interior, as it was still fully covered up in the prototypes; we also found a POV video shot in the RS e-tron GT, courtesy of , and posted it below.