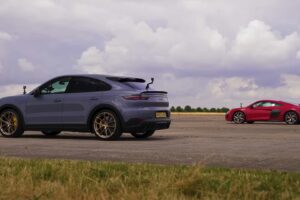 The Audi R8 and Porsche Cayenne couldn’t be more different. But specific performance configurations can level the playing field, which is evident in a new Carwow YouTube video. The rear-wheel-drive Audi R8 faces off against the potent Porsche Cayenne Turbo GT, which also comes with all-wheel drive.

The Porsche got another amazing start in the second race, but the Audi also improved. It got a much better launch but wasn’t enough to beat the Porsche. The third and final race sees the Audi get its best start, but it still can’t secure a first-place win, finishing the quarter-mile in 11.4 seconds, right behind the Cayenne’s 11.3-second time.

The first rolling race has both vehicles in their normal driving settings. This neuters the Cayenne’s AWD system, allowing the lighter Audi’s performance prowess to shine. The Audi is able to beat the Porsche in both rolling races, though the second one, when the two are in their sportiest settings, is closer than the first.

The final brake test was shockingly close. While there is a large weight difference between the two, which you think would matter, the Audi only wins by mere inches. The performance gap between supercars and super SUVs has narrowed.