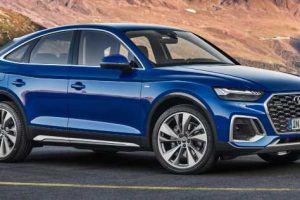 Audi’s obsession with coupé-style SUVs continues with the reveal of the new Q5 Sportback, a sleeker version of the second-generation Q5. Following in the footsteps of the Q8 as well as the Q3 and e-tron Sportback, it is said to offer the utility and technology of its regular sibling with the “expressive and distinctive design of more purebred sports cars.” Uh, okay.

The formula itself is simple and well-trodden – take a standard Q5 and add a roofline that slopes gently towards the rear of the car. The car’s height actually remains the same (as is its width), but its 4.69-metre length is seven millimetres longer, while the drag coefficient has dropped to 0.30.

Aesthetically, the Sportback borrows plenty from the facelifted Q5, including a wider and flatter “singleframe” grille, trapezoidal LED headlights with distinctive segmented daytime running lights, and redesigned tail lights with optional OLED technology, joined together by a chrome bar.

The S line model gets a unique grille mesh and chrome-trimmed front air intakes, as well as an entirely new rear bumper design that ditches the quad tailpipes in favour of a huge chrome strip. Inside, the Sportback joins the facelifted Q5 in adopting the latest touch-based Multi Media Interface (MMI), jettisoning the rotary controller on the centre console. As expected, the boot is slightly smaller at 510 litres, although you can claw some of that back with the optional sliding and reclining rear bench, which can boost space to 570 litres. With the rear pews folded, cargo capacity is increased to 1,480 litres.

Safety-wise, the Sportback can be specified with adaptive cruise assist that will accelerate, brake and steer the car on its own within legal limits. There’s also a predictive efficiency assistant that will automatically adjust the speed to suit driving conditions situation, topography, speed limits and other road users; it’s claimed to reduce fuel consumption by as much as 10%. At launch, the Sportback will be offered with 2.0 litre turbocharged petrol and diesel engines, both producing 204 PS and paired with a seven-speed S tronic dual-clutch transmission. There will also be an SQ5 TDI powered by a 347 PS 3.0 litre twin-turbo diesel V6, mated to an eight-speed automatic gearbox.

These variants come as standard with quattro all-wheel drive and are available with a mild hybrid system. The latter allows the car to coast with the engine off and engage the start-stop system when decelerating from 22 km/h. Two plug-in hybrid variants with differing outputs will be introduced later on.

The Sportback will also be available with optional adaptive damping, as well as an air suspension system that can adjust the ride height in five stages by as much as 60 mm. The SQ5 will come as standard with a specially-tuned version of the air suspension.