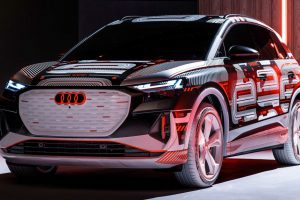 Say hello to the Audi Q4 e-tron. The electric SUV was first shown as a concept back in February 2019, but Audi now is ready to show off some of the car’s strongest features, and the bulk of it takes place on the inside.

With a footprint of 4,590 mm long, 1,865 mm wide, 1,613 mm tall and a wheelbase of 2,760 mm, the SUV is billed by Audi as a true all-rounder. It’s only slightly larger than a typical mid-sized SUV, and thanks to clever packaging, the cabin offers enough space – all 1,830 mm of it – to rival larger, full-sized SUVs. You could tell it’s quite a sizeable car from its bulbous shape, even though much of it is camouflaged.

The first few things to take note of when entering the cabin are the wide door apertures, high seating position, and the absence of a centre tunnel. Audi says the seating position in the second row is almost seven centimetres higher than the front, but there’s still enough headroom and kneeroom for rear passengers.

In fact, the automaker says the Q4 e-tron is even more spacious than its direct rivals. For example, the boot space is pretty cavernous at 520 litres, which expands to 1,490 litres with the rear seatbacks folded (40:20:40 configuration). There’s also a generous amount of storage compartments found throughout the cabin, which add up to a volume of 24.8 litres (including the glove compartment, centre armrest and bottle holders).

Now, let’s talk about that unique cockpit. Unlike the e-tron and e-tron Sportback, the Q4 e-tron’s dashboard is much cleaner and pleasing to the eyes. The infotainment display rests nicely in a central enclosure, and there’s a long LED strip just below it that stretches all the way to the edge of the front passenger dash.

There’s a floating centre console for the push-start button and gear selector switch, as well as a drive mode button and capacitive rotary volume control dial. Underneath this floating panel is a pretty spacious stowage space with dual USB-C ports, a 12-volt socket and a phone holder. Behind that you’ll find twin cubbies, and a centre armrest. Let’s take a closer look at all the technologies onboard, starting with the basic 10.25-inch digital instrument cluster. As usual, this gives all the info you need, but if you want a fancier unit with a customisable views, then this can be upgraded to the Audi virtual cockpit or Audi virtual cockpit plus, the latter being the range-topping system.

Complementing the digital instrumentation is the new-generation double-spoke steering wheel with backlit touch panels. These “buttons” feature soft haptic feedback much like your smartphone, and they even support swipe gestures to help you quickly navigate your music list, for example. Range-topping variants will get shift paddles and heated function as well.

What’s really unique this time is the fitment of an augmented reality head-up display. This is an optional piece of tech (basically an add-on AR algorithm written on top of the existing MIB3 infotainment system) that takes the head-up display system that most of us are familiar with to another level. This is separated into two visual aids. The first section works just like a regular head-up display, providing real-time readouts of vehicle speed and current speed limit. Meanwhile, the AR portion visually amplifies information such as GPS turn arrows for better legibility, and this superimposed image (60 Hz refresh rate) appears as though it’s floating some 10 metres away from the driver.

Think of it as floating directional arrows. It’s dynamic, meaning the arrows will be animated once you approach a junction or intersection. After making the turn, if the road ahead is a long straight, the arrow will fade out and only reappears when the driver approaches the subsequent point of action. A distance-to-turning readout (in metres) will also be displayed.

Another use for this AR system is when adaptive cruise assist is activated. It essentially provides visual hints or warnings such as red lines when the lane keeping assist function detects that the car is beginning to veer out of its lane. Also, when there’s another car ahead, said car will be marked with a coloured stripe.

Multiple computational processes (including a special “shake compensation” process) take place to ensure that the AR imagery does not jump into the wrong position while driving. Key to this system is the overhead camera unit (behind the rear-view mirror), which works with the front sensors and ESC system to provide accurate estimations of the objects ahead. Neat, right?

In the middle of the dashboard rests a 10.1-inch MMI touch display with a resolution of 1,540 x 720 pixels. It’s pretty sizeable and includes handwriting text and voice control inputs, but it’s the larger 11.6-inch display that you want. This screen is the largest display (1,764 x 824 pixels) to be fitted in any Audi to date, and it will be available at the end of the year.

In terms of seats, the usual heating and ventilation functions can be had, including electric adjustment and lumbar support. There are various designs available, including those with integrated head restraints and rhombus pattern upholstery.

Customers can choose from several interior colours (black, steel grey, Santos brown, or pergament beige), plus nine equipment packages that includes five basic options and four S line treatments. Customers opting for the latter can choose between a fine Nappa leather, or even a combination of real and artificial Dinamica leather, with the latter made from 45% recycled polyester.

Another noteworthy feature here is that, in the event of a side impact, a centre airbag will be deployed to prevent the driver and the front passenger from colliding. This centre airbag will deploy alongside the side airbags to minimise injuries. Expect the Audi Q4 e-tron to make its world debut, soon.