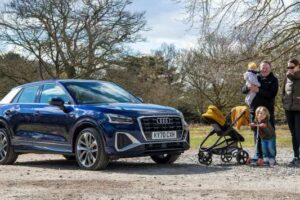 First report: the facelifted version of the popular Audi Q2 SUV is proving to be a hit