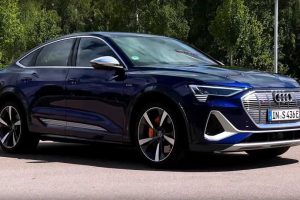 It’s a version for driving enthusiasts that bumps up acceleration and agility.

Before we jump to the conclusions, let’s recall that the German automaker currently offers several e-tron models/versions:

The “S” versions are equipped with a three-motor setup (1 in the front and two in the rear) for not only all-wheel-drive but also torque vectoring for the rear wheels. In regular e-trons, there are two motors, for more conventional all-wheel- drive.

Autogefühl‘s review, which includes a test drive on the track, confirms that more power (370 kW of power and 973 Nm of torque) and torque vectoring improves the performance of the e-tron.

The acceleration (100 km/h / 62.1 mph in 4.5 seconds) is noticeably better than in regular versions (but not as quick as in top BEVs, like for example the Tesla Model X). Torque vectoring allows it to get out of the corners a little bit quicker, but it will probably not change much in normal driving on public roads.

It’s clearly a version for driving enthusiasts, who have the opportunity to use that higher performance. According to the review, it will be difficult to find a similar vehicle (ICE or BEV) with as good driving dynamics as the e-tron S Sportback.

On the other hand, the car is slightly more expensive and has a slightly lower range, which means it’s rather not for regular drivers (see also the Audi e-tron Sportback review here).

Other than that, the e-tron S Sportback/e-tron S is silent, very agile (especially for its size and weight), has precise steering, stiffer suspension, sport seats, high build quality, great sound system and a user interface that’s easy to learn.