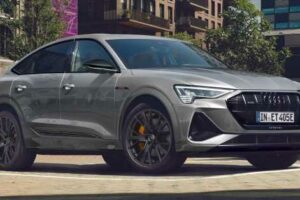 New-generation battery upgrades are coming for the Audi e-tron and e-tron Sportback electric SUVs at the arrival of their respective facelifts in the second half of 2022, reports Autocar, bringing more battery range to the vehicles to serve until around 2025 when a new-generation SUV is set to take their places.

The new battery will be joined by more efficient drive motors and upgraded electronics systems to improve energy recuperation, in addition to other enhanced functions. Upgrades to the e-tron and e-tron Sportback powertrain are set to increase range to more than 596 km, sources told Autocar.

The current 95 kWh battery offers up to 398 km of range on a full charge, and in November 2020 the e-tron was upgraded to be capable of 22 kW charging which enables the 95 kWh battery to be fully charged in five hours. This mid-lifecycle upgrade for the e-tron and e-tron Sportback SUVs are on the way despite the Q6 e-tron electric SUV that has been planned for debut next year as well, and this will be the first Audi to be built on the Premium Platform Electric (PPE) architecture that will underpin the next Macan, and which has been evolved from the J1 architecture of the e-tron GT and the related Porsche Taycan.

That said, “the Q6 e-tron will compete in a different market segment to the e-tron and the e-tron Sportback. It’s smaller and roughly the size of the conventionally powered Q5, however its dedicated platform will allow it to offer interior and load-carrying space similar to today’s Q7,” the source told Autocar, also adding that the Q6 e-tron is being planned for launch in 2023.

Before the Q6 e-tron makes its debut, another Audi electric SUV is slated to launch, though this will be exclusively for the China market. This will be a seven-seater sister model to the Volkswagen ID 6, and will likewise be based on Volkswagen’s MEB platform.