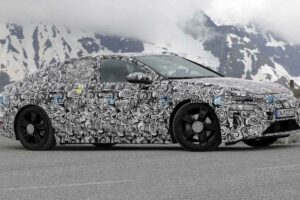 The Aud A6 E-Tron will reportedly transform from an EV concept into a production vehicle later this year. This gallery of spy photos catches a camouflaged example conducting brake tests in the Austrian Alps.

Compared to the concept, this camouflaged A6 E-Tron adopts a front end with split headlights. The upper section is for the main lamps, and the running lights occupy the lower area. Both models have a trapezoidal lower fascia, but the outline of the shape is much sharper on this car. The vertical inlets in the corners are narrower than on the concept.

The production-spec A6 E-Tron has a profile that’s very similar to the concept (see comparison below). The front and rear overhangs appear to be a bit longer on the vehicle in these spy shots. The camo hides the design details along the flanks. The wheels on this vehicle have a retro look with spokes that become wider at the rim.

Compared to the A6 E-Tron Concept, the production version appears to have some big changes. This vehicle wears placeholder taillights, but it seems the full-width layout is gone. The show car’s sharp wraparound element is also absent from the model in these spy shots.

The A6 E-Tron rides on the Premium Platform Electric (PPE) platform, which also underpins the upcoming Porsche Macan EV. There are no powertrain details for the production-spec model, but the concept has a pair of electric motors making a total of 470 horsepower (350 kilowatts) and 590 pound-feet (800 Newton-meters). The company estimates the vehicle can reach 62 miles per hour (100 kilometers per hour) in less than four seconds.

The concept uses a 100-kilowatt-hour battery pack that provides an estimated range of more than 435 miles (700 kilometers) in the WLTP test. The system supports fast charging at up to 270 kilowatts, providing 186 miles (300 kilometers) of driving distance in just 10 minutes.

Following the A6 E-Tron’s rumored debut later this year, Audi confirms the Avant wagon variant of the EV is coming to market in 2024. It is mechanically identical to the four-door, but the extended roof lets owners stuff more cargo into the rear.