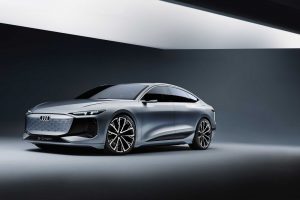 This may be called an A6, but it is neither mechanically nor visually related to the current A6 sedan.

Even though Audi already has a big, luxurious electric sedan with a sporty twist, the freshly unveiled E-Tron GT, it has just shown a design study for another, at the 2021 Shanghai Auto Show. Dubbed the Audi A6 E-Tron Concept, it looks very different to the E-Tron GT (even though it is still clearly an Audi), but the big news is that this is built on the new Premium Platform Electric (PPE for short), an EV-only chassis architecture developed by Porsche and Audi.

And just like the E-Tron GT and Taycan, it can rapid charge at very high rates (up to 270 kW) and even though we have not been told its exact battery pack size, Audi informs us that this concept can travel for up to 700 km on one charge, based on the WLTP test cycle. The press release states that the battery pack is 100 kWh, but a mention is made that the platform can accommodate an even larger pack.

Audi points out that in ideal conditions, this study can charge from 5 to 80 percent in under 25 minutes and that 10 minutes of charging add over 300 km (186 miles) of range.

The vehicle is 4.96 meters long, 1.96 meters wide and 1.44 meters high and it is a hatchback, not a sedan. Audi also mentions it has a very low drag coefficient of 0.22 Cd, which is very impressive, but not quite as low as the Mercedes-Benz EQS’ 0.20 Cd result. Unlike the EQS, though, which ditches the traditional three-box design of sedans for a larger greenhouse and passenger compartment area, the A6 E-Tron concept looks like a more traditional fastback.

It still has a relatively long hood and the greenhouse is pushed back, like you would see in a front-engined, rear-wheel drive vehicle (like Audi’s larger ICE offerings). This is by no means a bad thing, especially since some have called the EQS weird looking and its strange proportions, no matter how much interior space they free up, still require a bit of getting used to.

Other features present on the A6 E-Tron study include matrix LED headlights that can also project images (if you park it facing a wall, you can project a movie onto said wall or even play a video game), rear lights that feature OLED technology, projectors under the doors that automatically turn on when the doors are opened (and they are said to be especially bright). The wheels measure 22 inches and, in case you were wondering, the concept’s silver color is called Heliosilver and it has very high reflective properties, allowing the climate control system to not work as hard to maintain temperature inside the cabin.

Regarding the PPE platform, Audi informs us that the first production vehicle to be underpinned by it will arrive in the second half of 2022 and that it will be used in B-, C- and D-segment vehicles in the future (both in regular cars, as well as SUVs). We already know the fully-electric Porsche Macan will be built on PPE, as well as its equivalent model from Audi.