Audi A3 Confirmed To Get Next Generation As Entry-Level Car 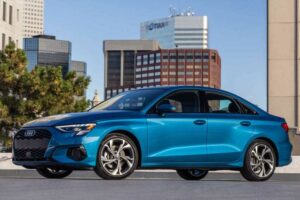 Audi will bid a premature adieu to the Q2 as the baby crossover will be discontinued after only one generation. The A1 supermini will suffer from the same fate because the Four Rings are going to prioritize bigger and more expensive cars. Where does that leave the A3? Well, CEO Markus Duesmann has said the compact vehicle has a future in Ingolstadt’s lineup where it’s going to serve as the entry-level model once the A1 and Q2 will be terminated.

“When it comes to the entry level, the A3 or its successor, that will probably be the entry level. So yes, I can commit that from the A3 segment, we will be offering a range [of vehicles].”

The last part of his statement suggests there’s going to be more than just one model available. It’s unclear whether he was referring to the Sportback and Sedan and/or one of the two body styles combined with the Q3. A crossover in this segment is certainly happening since the recently previewed Cupra Terramar will be built at the same Györ plant in Hungary alongside the mechanically related next-gen Q3.

Audi’s head honcho didn’t go into any specifics about which direction the A3 will take, but our logic tells us it’ll be offered exclusively as an EV. The German luxury brand has already announced its last new ICE-powered car is going to be launched in 2025. Meanwhile, the current fourth-generation A3 was introduced in May 2020, so it’s going to stick around until 2027 or so. At that point, all newly launched Audis will have been purely electric.

Archival Mercedes will cut down on the number of compact offerings from seven to four while a recent report speculates some of BMW’s small ICE-powered vehicles are in jeopardy. The German trio appears to be gradually switching focus to bigger vehicles as even though these are sold in fewer numbers, they have much higher profit margins.

Getting back to the A3 at hand, spy shots have revealed a high-riding derivative is on its way, presumably carrying the Allstreet suffix to echo the recently renamed jacked-up A1. A mid-cycle facelift is expected by 2024 and should include the spicy S3 and RS3 as well. Needless to say, the iconic inline-five engine is on its deathbed so you might want to hurry up.