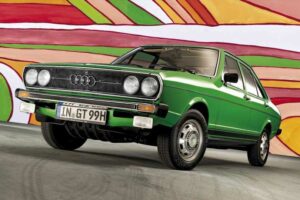 BMW M isn’t the only German firm celebrating its 50th birthday this year. Just in time for the Summer Olympics in 1972, the first Audi 80 was introduced globally. Coded B1, the Audi 80 is said to have established the compact sedan or B series. On the subject of the most important Audis in history, the Audi 80 should always be part of the conversation given its contribution to the brand in terms of history and sales.

Apart from being a true classic, Audi claims that the 80 and its successors have always been pioneers of major innovation. These include the four-cylinder TDI, the Quattro drive with the self-locking center differential, the dual-clutch transmission, and the rear-axle sport differential.

Of course, the innovations include the five-cylinder turbo engines as in the first RS model, repeatedly demonstrating Audi’s expertise in Vorsprung durch Technik.

“In an impressive way, the Audi 80 demonstrates that Vorsprung durch Technik is a tradition at Audi,” said Oliver Hoffmann, Member of the Board of Management of AUDI AG for Technical Development.

With revered handling and low fuel consumption, the Audi 80 was lauded by the local and international press. It received the 1973 European Car of the Year award, shortly after being introduced in the market.

The Audi 80 was also a commercial hit, both in Europe and the US where it’s sold as the Fox. It became the first million-seller for Audi and in conjunction with its successor, the Audi A4, has already amassed 12.5 million units (from B1 to B9) produced as of date.