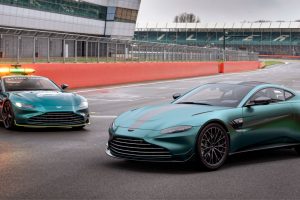 This is the Aston Martin Vantage F1 Edition, which is meant to celebrate the brand’s return to the motorsport after a hiatus of around six decades. The company says this is its first core model to benefit from direct input from its latest CEO, Tobias Moers, and is based on the official safety car of F1 this season.

As such, the upgrades mimic the track-only safety car, starting with an increase in power from the AMG-sourced 4.0 litre twin-turbo V8 by 25 PS to 535 PS at 6,000 rpm, making it the most powerful Vantage that will be offered to customers to date. The accompanying ZF eight-speed automatic transmission that drives the rear wheels also receives some tweaks, with an optimised torque cut during upshifts that reduces shift times and increases the feeling of directness and precision.

On the chassis side of things, front structural stiffness has been increased to provide better steering feel and response, while reworked damper internals enhance their effective force range. Aston Martin claims this widened bandwidth brings a noticeable improvement in vertical body control – both through high-speed compressions and over crests – without any deterioration in low-speed compliance.

Other changes include an increased rear spring rate and lateral stiffness to sharped turn-in, increase traction and ensure compliance with the front-end’s rate of response, joined by a revised steering system. The Vantage F1 Edition also gets 21-inch wheels for the first time, which are wrapped with bespoke Pirelli P Zero tyres. The car also gets a complete aero kit that delivers 200 kg more downforce than a standard Vantage at top speed, with components like a full-width front splitter, front dive plans, underbody turning vanes and a large rear wing. To complete the look, there’s a vaned grille as standard, carbon-fibre exterior detailing, unique graphics and quad exhausts.

Customers will get a choice of three paint finishes to choose from, including Jet Black, Lunar White and Aston Martin Racing Green, the last of which mimics the factory team’s livery. Inside, you’ll find Obsidian Black leather and Phantom Grey Alcantara upholstery and trim, with a choice of Lime Green, Obsidian Black, Wolf Grey or Spicy Red contrast stripe and stitching.

The Vantage F1 Edition is available as a coupe or roadster, with prices starting from 142,000 pound sterling (RM807,520) in the United Kingdom, and deliveries will begin later in May this year.