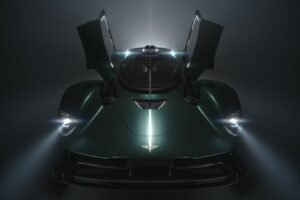 This year marks the 70th anniversary of Aston Martin entering the North American market, and to celebrate the occasion, the British carmaker will hold a big bash at the Pebble Beach Concours d’Elegance event set to take place in the middle of August.

The celebration will take place at a custom-built 11,300-square-foot space (the company calls it a luxury club house) overlooking the Pebble Beach Golf Links, where the company will display a wide variety of models that pays tribute to its past, present and future.

According to the company, there will be two cars that will make their official North American debut, including the Valhalla as well as an “exciting new product which extends the brand’s performance credentials a step further.” We already know plenty about the Valhalla, but we’re only treated to a teaser of the latter model, which appears to be roadster version of the Valkyrie.

In a photo, we can see headrests poking up behind the top edge of the windshield and scissor doors instead of the regular coupe’s gullwing doors. Given the car’s packaging that doesn’t leave a lot of room for a powered mechanism, the Valkyrie Roadster (it could also be called the Volante) will likely require its owners to manually attach a roof to deal with unfavourable weather conditions. Alternatively, it could also be permanently open if there’s no place to stow a roof in the car.

As a bit of a recap, the Valkyrie is Aston’s Martin’s flagship mid-engine hypercar that was previously known as the AM-RB 001 and will be limited to just 150 units. Powered by a 6.5 litre naturally-aspirated V12 developed with Cosworth and featuring a KERS-style hybrid system, the Valkyrie outputs 1,176 PS (1,160 hp) and 900 Nm of torque.

Besides the Valkyrie Roadster and Valhalla, the latter being strictly limited to 999 examples over two years, Aston Martin will also bring along its core models like the DB11, DBS, Vantage and DBX, as well as the special V12 Speedster. Joining the line-up is the ultra-expensive DB5 Goldfinger Continuation, which is part of the company’s plan to honour 50 years of James Bond.

If you can recall, the latest and 25th Bond film – No Time to Die – was delayed due to the pandemic, and is now scheduled to be released in September. There are plenty of other reasons to celebrate too, as Aston Martin managed to slash its pretax losses by a considerable amount, and its Formula 1 team recently secured a second-place finish at the Hungarian Grand Prix.