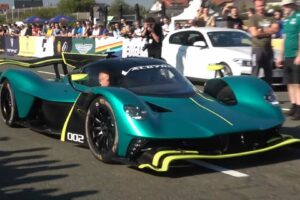 Spotting an Aston Martin Valkyrie AMR Pro in the real world is a rare sight. There will only ever be 40 production examples of the track-only machine in existence, and a new video from the 912fordgt YouTube channel captured one blasting down an airstrip. The video captures the car’s stunning exhaust note from its glorious V12 engine.

The car first debuted as a concept in 2018, changing quite a bit before the production model broke cover in July of last year. Aston Martin stretched it by 10.5 inches (266 millimeters) over the road-going version, increasing the overall length by 15 inches (380 mm). Aston also widened the front and rear tracks and tweaked the underbody for better aero.

Aston also added an extreme aero package that gives the car its menacing aesthetic. This helped the car create twice as much downforce as the road version, making it capable of achieving a lateral acceleration of more than 3G. Aston uses carbon fiber throughout the car’s construction, including the body and the suspension wishbones. Aston also used Perspex for the windows to save even more weight.

One of the more significant changes during its development happened to the powertrain, with Aston ditching the 1,100-horsepower (820-kilowatt) hybrid setup for a non-hybrid naturally aspirated 6.5-liter V12 engine built by Cosworth. This reduced the car’s weight while still producing 1,000 hp (745 kW).

The video captures several of the car’s runs down the closed track, and it sounds like a race car as it revs to an astonishing 11,000 rpm. The track-only Valkyrie looks wild with its aero package, but the road-going version also looks otherworldly with its sleek, futuristic styling. It has a top speed of 250 miles per hour (402 kilometers per hour), which is plenty for the road and the track.

Deliveries for the track-only supercar began late last year, and owners will be able to take their cars to dedicated track experiences. The program starts this fall, allowing drivers to race on famous courses such as Silverstone, Nurburgring, and Circuit of the Americas. There are only 40, so keep an eye out.