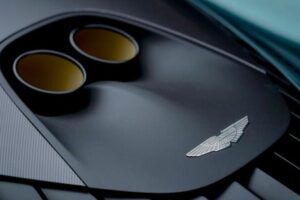 Prince Charles says he made ‘terrible bosh’ of Aston Martin

Known around the world for powerful engines and refined luxury, Aston Martin has announced it will make a fully-electric car within three years. Partnering with a fellow British brand in battery specialist Britishvolt, Aston will have electric models in their line-up including an SUV.

The two companies will work on a number of projects as Aston aim to have EV batteries designed that will specifically work in high-performance cars.

The 109-year old company now wants to have all cars they sell to have a fully electric option by 2026, and for their entire range to be battery-powered by 2030.

That’s the year the Government has set for the sale of all petrol and diesel cars to be banned.

Their new agreement will stand in place with Mercedes-Benz, who currently owns 20 percent of Aston Martin.

While Aston Martin does have a car with battery power, it’s the plug-in model ‘Valhalla’ which won’t arrive until 2024.

The staggering supercar features two electric motors, but they are combined with a traditional four litre V8 engine.

Together the power output is 937bhp which propels the car to a top speed of 217mph.

Although an exact model isn’t known for the first fully-electric option, it’s likely to include an SUV and replacements for the current DBS, DB11 and Vantage offerings.

Aston Martin CEO Tobias Moers said: “Working together with Britishvolt, I believe we can create new technologies to power benchmark-setting Aston Martin electric cars that will match our reputation for high performance and ultra-luxury with the highest standards of sustainability.”

A plan under the previous CEO Andy Palmer to launch a four-door all-electric Aston Martin was scrapped as the long-term business plan changed.

But that changed again in February last year when they announced they would electrify 90 percent of their range by the end of the decade.

Britishvolt meanwhile is also working on producing batteries for Lotus’ new range including their first all-electric hypercar due in 2026.

Britishvolt hopes to build the UK’s first gigafactory which would be based in Northumberland and produce 300,000 lithium batteries a year.

They aim to have the factory up and running by 2024.

Orral Nadjari, Chief Executive Officer of Britishvolt said: “For a prestigious marque such as Aston Martin, staying true to its world-renowned brand of ultra-luxury, high-performance vehicles, whilst transitioning to electrification, means insisting on customised, sustainable battery cell technology that pushes the boundaries of performance.”

He added: “Britishvolt is excited to be collaborating with Aston Martin, helping accelerate that switch to electrification – I believe we make formidable partners.

“This collaboration once again highlights the value of working hand-in-glove with customers to co-develop and manufacture tailored, sustainable, localised battery cells, allowing vehicle makers to deliver superior products. Technologies that reset the benchmarks.

“We are excited about the prospect of an all-electric Aston Martin powered by Britishvolt’s low carbon, sustainable battery cells.

“Collaboration like this is the only way forward for a successful energy transition.”