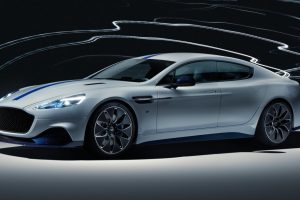 Aston Martin will debut its first fully electric vehicle by 2026 with technology from Mercedes-Benz, said Aston Martin CEO Tobias Moers to Automotive News Europe. This comes after a strategic technology agreement between Aston Martin and Mercedes-Benz was announced last month, which will see Aston Martin shares issued to the German brand in stages over the next three years.

The news site speculates that the forthcoming fully electric model from Aston Martin could borrow Mercedes-Benz’s EVA platform that forms the basis of the EQS. Additionally, Moers hinted that the ongoing development for the powertrain in the Aston Martin Valhalla could make way for a Mercedes unit.

To this end, Moers said that the team is still working on developing the powertrain for the mid-engined hypercar, which suggests that it could be delayed from its debut originally planned for 2022. “We are still working on that hybrid powertrain, but we now have alternatives. It’s too early to say,” Moers said. Originally, the Valhalla was planned with a 3.0 litre turbocharged V6 hybrid with outputs of over 700 hp, conceived at first as a replacement for the Mercedes-AMG V8 engine in existing Astons which has been slated for replacement in the German brand’s product line-up by a hybrid four-cylinder unit.

More new models from Aston Martin featuring Mercedes-Benz technology will begin to arrive from late 2022 or early 2023, said Moers, and a more populated model roll-out is scheduled for 2023, when a replacement for the DB11 could be unveiled. A plug-in hybrid version of the DBX SUV is also slated for debut that year. Moers told Automotive News Europe that Aston Martin aims to sell 10,000 annually by 2024, with one-fifth comprised of electrified models.

The stake in Aston Martin held by Mercedes-Benz currently stands at 2.6%, and this is set to grow to 20% by 2023. As part of the deal, Mercedes-Benz will supply its hybrid and electric powertrains as well as vehicle systems and components to the British luxury marque. The initial tie-up between the two brands saw Aston Martin gain access to Mercedes-AMG V8 engines for the DB11, Vantage as well as the DBX.