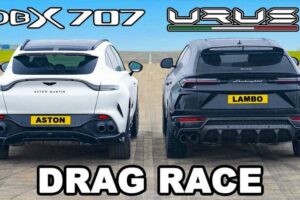 The Aston Martin DBX and the Lamborghini Urus are some of the fastest crossovers you can buy today. These posh performance high-riders also faced on the drag strip before. Italy went home victorious that day thanks to a substantial power advantage.

But instead of coming back with the same engine, the DBX returns to the drag strip with more muscle under the hood. While it still has the same 4.0-liter twin-turbo, the Aston now has 697 horsepower (520 kilowatts) and 664 pound-feet (900 Newton-meters) of torque. Because of that, this DBX is called the 707 because of its metric horsepower rating of 707 PS.

This time around, it’s the Lamborghini that’s on the back foot. It loses 56 horsepower (41.7 kilowatts) and 37 pound-feet (50 Newton-meters) of torque to the Briton. Granted, the Urus is lighter, but it might not be enough to beat the Aston Martin this time around.

The drag race ran in wet conditions, but the results were consistent. The Aston Martin finally edged the Lamborghini. The DBX was ahead of the Urus by three-tenths of a second in the quarter-mile run and pulled away as the race reached the one-mile mark. In the rolling drag race, the Urus tried to keep up with the DBX; the horsepower advantage of the latter meant the Lambo had to play second fiddle. There is one challenge where the Urus beat the DBZ fair and square, but you’ll have to watch the video to know where it won.