Are electric cars cheaper to run? 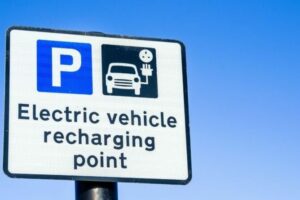 As the significant and detrimental effects of climate change loom, paired with the current fuel crisis raising prices of petrol and diesel to record highs, the UK public is increasingly turning to alternative methods of transport – and this includes a swift migration to electric cars. Research carried out by Next Green Car showed a growth of 74 percent in registered electric cars since 2020.

In November 2021, the UK Government announced an “electric vehicle revolution”, which new legislation due to come into force this year.

The legislation requires new homes and buildings such as supermarkets and workplaces, as well as those undergoing major renovation, to install electric vehicle charge points.

The Prime Minister’s office issued a statement saying: “England will lead the world to mandate such building regulations, kicking off a decade of delivery in hundreds of thousands of charge points while creating further green jobs across the country.

“Up to 145,000 extra charge points will be installed across England each year thanks to these regulations, in the run-up to 2030 when the sale of new petrol and diesel cars will end in the UK.

“This builds on the over 250,000 home and workplace charge points the government has already supported to date.”

Whether or not the initiative was a contributing factor propelling the public’s transition to electric-powered vehicles, sales have largely increased – with the Guardian reporting British drivers to have bought more electric cars in March alone than in the whole of 2019.

So what is spurring this cross over from internal combustion engines – is it because they’re cheaper to run?

Are electric cars cheaper to run?

However, electric vehicles are likely to cost you less over the course of ownership.

“In addition, there are various incentives offered such as government grants or schemes, Vehicle Excise Duty discounts or exemption, and also exemption from Fuel Duty.”

Are you considering a swap over to an electric car? Have your say in the comments.

The Government is offering an electric car grant of up to £1,500, which is automatically included in the dealer’s price.

The Government’s Electric Vehicle Homecharge Scheme supports up to 75 percent of the cost of an electric car charger for the home, capped at £350 off the installation price.

How much does it cost to charge an electric car?

Charging costs vary depending on the charge point network as well as the location of the charge points, but on average, it’s reported it costs a fifth of the price of fuel.

EDF Energy said: “Many local authorities offer a pay per session approach to on-street chargers. Occasionally they can be free to use if you have access to a network subscription.”

Costs also depend on the power rating of the charger you’re using as well as the car’s battery size, and timing can take anything from 30 to 60 minutes, to 10 hours.

The three main types of chargers available include:

Prices are measured by pence per kilowatt-hour (kWh), and Pod Point rapid chargers. for example, cost 23p/kWh at Lidl and 24p/kWh at Tesco.

This works out to around £6-7 for 30 minutes of charging (and for an average EV, this amounts to about 100 miles of range).

As fuel prices remain at record highs of 163p and 175p per litre for petrol and diesel respectively, despite Chancellor Rishi Sunak’s pledge to cut prices by 5p during his Spring Statement, it’s looking likely that electric cars might see the revolution a lot sooner than predicted.