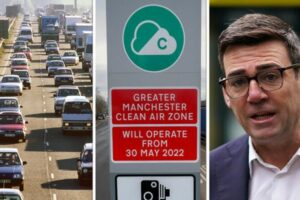 A Clean Air Zone in Greater Manchester was set to be introduced in May, with heavily polluting vehicles being charged daily to drive inside the area. The scheme would have seen older taxis and private hire vehicles charged £7.50, a £10 charge for vans and buses and a cost of £60 for buses, HGVs and coaches.

The plans for the charging area have since been delayed with the Government and Greater Manchester Combined Authority deciding to pause plans.

Appearing on BBC One’s Question Time, Greater Manchester Mayor Andy Burnham and Conservative MP Jake Berry were asked about levelling up in the north of England and the clean air zone.

Andy Burnham said: “This is typical of the modern Conservative party. They impose something on us as they’ve done in other cities, Birmingham, Bath and other places.

“A legal requirement on our councils to clean it properly.

“They don’t fund it properly and were left with this legal directive and then they campaign against it.”

In response, the MP for Rossendale and Darwen, said: “Your plans for a Clean Air Zone are going to put bus companies, plumbers, mobile hairdressers and taxi drivers out of business.”

Mr Berry’s constituency would have been affected by the CAZ, which would have included 10 councils.

The Mayor of Greater Manchester quickly responded to the MP, saying: “This is your Government’s policy.

“It’s a directive on local councils and we’ve worked in good faith to try and implement it.

“I went back to your Government and said to them: ‘This isn’t going to work because you’ve refused a hardship fund for people on the lowest income and now there’s inflation in the vehicle market’.

“It’s a national Government policy and then you campaign against it.

“You impose this directive on clean air and then you all come out saying scrap the clean air zone.”