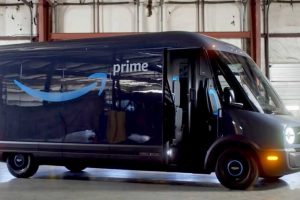 Amazon will need a lot of vans in the future, not just for Prime Day. Specifically, 100,000 vans. And just a few days ahead of Prime Day, the retail giant showed off a prototype of the electric delivery van that will be built by Rivian, the first 10,000 of which should be on the road in a little over a year.

Rivian developed the vehicle specifically for Amazon’s needs, incorporating an advanced suite of sensors, three levels of shelving, a spacious floor inside allowing for easy movement, bright tail lights for safety, Alexa integration for hands-free navigation and exterior cameras linked to a large digital display. The vans were also designed with a large windshield for safety, as these vehicles will be in residential areas for most of the day.

“The vehicle we’ve developed with Amazon is not just electric. We prioritized safety and functionality to create a vehicle that’s optimized for package delivery,” said RJ Scaringe, Rivian CEO. “We thought through how drivers get in and out of the van, what the work space feels like and what the work flow is for delivering packages.”

The van’s range hasn’t been revealed yet, but since these vans will focus on last-mile delivery it could get away with a relatively small battery and range, well under 200 miles. That’s because vans of this type are usually confined to a specific geographic area, and only operate between certain hours, at least when it’s not holiday season. One reason electric delivery vans are expected to take off among several logistics giants is because of this very predictable use pattern: Vans cover only a certain geographic area between certain hours, so their mileage is easy to predict, and they can recharge at night at their home bases, which means they won’t take up public charging stations. This makes fleet operations much easier and much more predictable.

“When we set out to create our first customized electric delivery vehicle with Rivian, we knew that it needed to far surpass any other delivery vehicle,” said Ross Rachey, Director of Amazon’s Global Fleet and Products. “We wanted drivers to love using it and customers to feel excited when they saw it driving through their neighborhood and pulling up to their home. We combined Rivian’s technology with our delivery logistics knowledge, and the result is what you see here-the future of last mile delivery.”

Rivian isn’t the only EV maker Amazon is working with: the retail giant has contracted Mercedes-Benz to build 1,800 electric vans for its European operations of two different types: the eSprinter and eVito. These two models will join Amazon’s fleet in Europe later this year, while the first Rivian vans will appear in its U.S. operations next year.