Amazon Now Has 1,000+ Rivian Electric Vans Making Deliveries In US 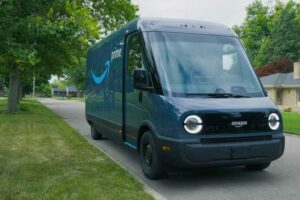 Amazon has announced it is deploying an increasing number of Rivian electric vans in over 100 US cities this holiday season.

Since first rolling out in July, Amazon’s zero-emissions vehicles from Rivian have delivered more than 5 million packages to customers in the United States.

The online retail giant said that hundreds of the vehicles rolled out this summer in more than a dozen cities, including Baltimore, Chicago, Dallas, Nashville, San Diego and Seattle. Since then, Amazon has expanded its fleet and now has more than 1,000 electric delivery vehicles (EDVs) making deliveries in more than 100 cities across the US.

“We’re always excited for the holiday season, but making deliveries to customers across the country with our new zero-emission vehicles for the first time makes this year unique. We’ve already delivered over 5 million packages with our vehicles produced by Rivian, and this is still just the beginning—that figure will grow exponentially as we continue to make progress toward our 100,000-vehicle goal.”

Amazon says its delivery drivers are sharing positive feedback about the vehicles, with favorite features including the spacious cabin and cargo area, superior visibility with the large windshield, automatic emergency braking, 360-degree cameras, and ventilated seats for fast heating and cooling.

In addition to the ongoing electrification of its North American fleet, the company recently announced plans to invest more than €1 billion ($1 billion) over the next five years to further electrify and decarbonize its transportation network across Europe. The investment is also intended to drive innovation across the industry and encourage more public charging infrastructure.