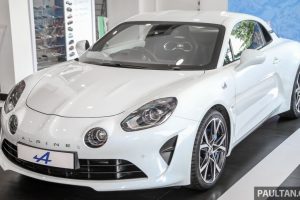 This comes as a big and very pleasant surprise. The Alpine A110 is now in Malaysia, on display at Renault distributor TC Euro Cars’ PJ headquarters. This one needs some explanation, as even many car guys don’t know what’s an Alpine. No, the car stereo maker did not suddenly diversify to cars.

Jean Rédélé, pilot, businessman and automotive pioneer, founded Alpine in 1955. The sleek original A110 berlinette is probably the most recognisable Alpine sports car. Those who are old enough to know what “Top Trumps” is would probably remember the sharp lines of the Alpine A310 and A610 – I do. During its existence, Alpine sold 30,000 sports cars and was world rally champion in 1973, among other racing achievements. Renault bought the Alpine brand in 1973.

In November 2012, it was announced that Renault and Caterham – then in F1 and owned by Tan Sri Tony Fernandes – would be joining forces to develop future sports vehicles, and the French carmaker will revive the Alpine brand for it. That partnership didn’t work out, and in June 2014, the divorce was finalised with Renault buying Caterham’s stake in the JV.

After going it alone, Renault came up with the Alpine Vision concept car in early 2016. The production Alpine 110 surfaced in March 2017. Low volume production of the Porsche Cayman rival happens at the Dieppe plant in France, the historical home of Alpine. Before the A110, Dieppe rolled out Renault Sport hot hatches like the Megane R26 and Clio RS.

The modern day Alpine A110 has a rear mid-engine, rear-wheel drive layout. The coupe is powered by a 1.8 litre turbocharged four-cylinder engine with 252 PS and 320 Nm of torque, paired to a Getrag seven-speed dual-clutch automatic transmission. Yup, that’s the 1.8L engine from the current Renault Megane RS, but in a lower state of tune. By the way, there’s no traditional gear lever for the DCT, but selection buttons and long steering column-mounted shift paddles for manual mode. The Road, Sport and Track driving modes alter the powertrain, steering, suspension, ESC intervention and the digital instrument cluster. By the way, agility and lightness are the main principles of Alpine, not big power.

The white example you see here is the Pure variant of the A110 (the sporty one compared to the more luxurious GT-flavoured Legende), with some choice options such as 18-inch diamond cut “Serac” alloys (17-inch is standard), Bleu Alpine brake calipers, chrome A logos on the front wings, front/rear reverse sensors, reverse camera and a Focal sound system.

Standard kit with the Pure includes LED lights front and back, lightweight Sabelt bucket seats (manual, of course) covered in leather and Dinamica upholstery, interior trim in leather and Dinamica, matte carbon fibre trim and a 7.0-inch touchscreen multimedia system. The French flags on the C pillars and quilted door card inserts are a cool touch. Acting as a bezel of sorts to the quilted bits are plastic trim that matches the car’s body colour, ND Mazda MX-5-style.

By the way, the Alpine isn’t a stripped-out lightweight special – all the creature comforts of a regular car (auto everything, cruise control, charging ports) are present.

So, what’s this car doing here? TCEC set up a standee beside the A110 with the message “for display purposes only”, and with the Renault F1 team rebranded as Alpine from this season, an Alpine road car maintains Renault’s links to the top tier of motorsports. We understand that while this is not (yet?) a brand or product launch, TCEC is gauging interest on the sports car. Would they do it? TCEC has been steadfastly bringing in the best of Renault Sport to Malaysia for many years now, so the next step up is possible.

How much would it cost? Well, the Alpine A110 is a Cayman rival, is faster than the 2.0L Porsche, is all-aluminium, and is built in small batches in northern France – it is therefore priced accordingly. No official word from TCEC, but according to our source who was involved in bringing in this unit, the A110 would set you back around RM320k in Langkawi and RM700k fully taxed. That’s no small sum, but in turn you’ll get a three-year warranty and a driver’s car build on a great (and rare) ethos of lightness.

By the way, in Renault’s latest “Renaulution” business strategy announced earlier this year, Alpine has been repositioned to be a 100% EV brand, with a small car and SUV rumoured to join a next-gen electric sports car that will also involve Lotus. So, this is the last call of sorts for the ICE-powered A110, a sports car of the old normal. Now or never, much like the Toyota GR Yaris, come to think of it.

The Alpine is rather exotic, and will be very exclusive compared to a Porsche Cayman. Its few lucky owners should be conferred the Légion d’honneur for being a next-level car enthusiast.