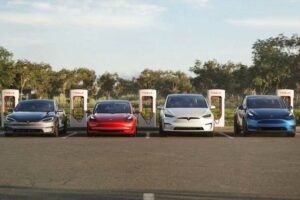 Tesla made a big deal about switching its standard range models to batteries made up of lithium iron phosphate (LFP) cells, citing their many benefits, like the better availability of materials and their lower cost. The manufacturer made it clear that LFP did not offer better weight, efficiency or energy density, but that for some applications it was ultimately a better choice.

Even though LFP is on paper not as good as the previous packs based around cells with a nickel-cobalt-aluminum (or NCA) chemistry, testing has shown there is some performance difference (although range does drop by around 10 miles), and another plus point is that Tesla says users can safely charge LFP vehicles all the way to 100 percent with much less fear of degradation; the manufacturer recommends limiting the charge for NCA packs to 90 percent.

Tesla began building LFP-equipped Model 3s and Model Ys in China last summer, and now during the most recent earnings call, it announced that over half of the vehicles it had delivered in the first quarter of 2022 had the LFP pack. The manufacturer notes that

Diversification of battery chemistries is critical for long-term capacity growth, to better optimize our products for their various use cases and expand our supplier base.

This is why nearly half of Tesla vehicles produced in Q1 were equipped with a lithium iron phosphate (LFP) battery, containing no nickel or cobalt. Currently, LFP batteries are used in most of our standard range vehicle products, as well as commercial energy storage applications. As a result of our energy efficient motors, a Model 3 with an LFP battery pack can still achieve a 267-mile EPA range.

Tesla previously announced that its Q1 2022 production number had jumped 69.4 percent year-over-year to just over 310,000 vehicles, and most of these were the smaller Model 3 and Model Y. As per Tesla’s claim, close to 150,000 of these had the LFP pack.

The company also increased the price of its NCA pack-equipped vehicles several times over the last year or more, while LFP-equipped variants kept their price; this made the Tesla Model 3 and Model Y not eligible for California’s Clean Vehicle Rebate Project (CVRP) which granted buyers a $2,000 rebate, making variants with LFP packs even more desirable.

Furthermore, Tesla also sent order holders who were waiting for their Model 3 or Model Y last year an email that their configured vehicle with an NCA pack would take many more months to arrive and they were asked if they wanted to switch to an LFP vehicle that they could receive much sooner.