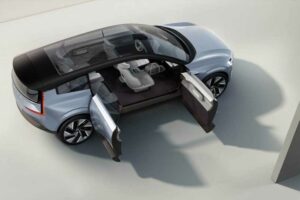 The upcoming Volvo EX90 all-electric SUV, the new flagship for the brand and replacement for the XC90, is rolling out its slow introduction in true Volvo fashion—by focusing first on all of its new safety tech before we even get a look at the thing. Last week, we learned about the EX90’s new driver monitoring system, with two cameras keeping an eye on driver awareness. This week, Volvo has announced a new array of seven radar sensors dotted throughout the interior of the new SUV, which can detect sleeping animals, unbuckled kids, and even vehicle break-ins.

Volvo reports that U.S. government statistics show (at least) 900 children had died in the country since 1998 from being left in hot cars. The automaker didn’t run the numbers on how many pets have been tragically lost, but the numbers are likely higher than you’d think. Now the Swedish automaker, which has a legacy of prioritizing new safety features in its vehicles, wants to make sure something like that never happens in a future Volvo.

The seven new radar sensors are located in the overhead console, in the rear trunk space, as well as next to the roof-mounted reading lamps, and Volvo says the system can detect even a submillimeter of movement in the interior when it’s activated. The main purpose of the radar array system is to serve as a reminder warning that will activate if a pet or child is detected inside when the user goes to lock the vehicle. If anything is detected to be moving, the driver is alerted and a reminder is displayed on the center console screen to check. Alternatively, Volvo says the system can be bypassed with a setting on the screen, and the climate control system can remain activated while parked with occupants inside. Company reps said the system prioritizes the climate control, so it sounds like it’s possible you could drain the high-voltage battery if you run it too long.

“The way we’ve been developing safety for decades is we identify the need, and then we address that and try to understand the mechanisms,” Volvo’s Lotta Jakobsson, an injury prevention specialist, told MotorTrend in an interview. “It all starts with understanding what needs there are. We’ve been aware of it for a long time, but we also want to have a good solution that is attractive for the user. This technology is capable of detecting a sleeping child and sleeping pet, as well as anyone awake, or anyone else, like a mother-in-law, and it now does it with the accuracy we’re targeting. Supporting when you need it, but not in your face when you don’t ask for it.”

We also asked Volvo’s Gunnar Ohlsson, manager of “interior perception,” if the radar system could have other applications within the vehicle: “Even though the occupant presence reminder is the most highly focused area, we are also using the sensors for more natural movements of occupants. We will use it for the seatbelt reminder functionality. We also use these sensors as input if someone is breaking into the car. It’s almost imagination that brings the limitations, what you can do in the future, so of course we are looking at possible ways of improving other functions for customers.” Ohlsson also said a remote mobile phone application integration with the radar system is a possibility for the future, as well.

Volvo says this system will be standard on the EX90, which will be revealed in full on November 9, and it will also pop up in future models. However, the radar array is a 60 GHz frequency, which some countries have yet to approve for automotive use, but Volvo says the tech will be good-to-go at launch in the U.S.