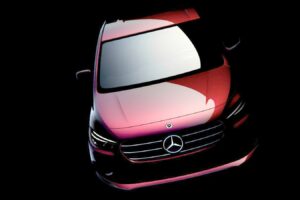 Mercedes-Benz has a plan to go fully-electric by 2030, even including the automaker’s diverse portfolio of commercial and private customer Sprinter and Metris vans with an all-new platform. W’re getting our first glimpse at those future vans today with a teaser for an all-new T-Class lineup of vehicles, likely set to debut in Europe.

Mercedes described the new model as intended for the premium “private small van” vehicle segment, likely targeting the #vanlife crowd in Europe, where private van ownership has traditionally been more popular than it is stateside, though the van-living lifestyle in the U.S. has been growing in recent years. You can also think of it as a very fancy MPV.

Mercedes says the T-Class, which is an all-new designation, will be a “completely new model” for “active lifestyles,” with a goal of providing another entry-level model to introduce new customers to the Mercedes brand. It’s likely the automaker plans to introduce the T-Class in both internal combustion (ICE) and EV configurations based on company intentions when the T-Class concept debuted in Europe last year, though it will still transform its lineup to all-electric by 2030.

Last July, Mercedes-Benz announced a group of all-new vehicle platforms to build its future off of, with an all-electric version of each of its vehicles planned to be offered by 2025. One of the three new platforms announced is VAN.EA, which is intended to usher “a new era for purpose made electric vans and light commercial vehicles, which will contribute to emission free transportation and cities in the future.” Mercedes hasn’t announced which platform this new T-Class will ride on, but if they have a new purpose-built van architecture ready to go, we imagine at least one version of the new T-Class will ride on VAN.EA.

It’s unclear yet what sort of product mix Mercedes has planned for this new T-Class model, like whether or not a new ICE model is planned this time, or if it will be all-electric only. The automaker has already introduced the EQV all-electric van in global markets, and previously confirmed that the next-generation EQV would get the new family architecture, though we don’t know yet if it will rebrand under the new T-Class family, or remain separate as the EQV.

It’s also unclear if it directly replaces the Metris or Sprinter vans, which are currently on sale in the U.S., or if the new T-Class is just reserved for Europe. The Sprinter and Metris models target more utilitarian and commercial customers versus the premium demographic the T-Class promises to attract. We will find out more when it debuts later this year on Tuesday, April 28.