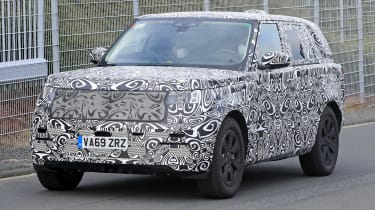 Our spy photographers have spotted the all-new Range Rover undergoing development on German roads, ahead of its scheduled launch in 2022. When it eventually reaches showrooms, the luxury off-roader will once again be tasked with taking on rivals such as the Bentley Bentayga, Mercedes GLS and BMW X7.

These spy shots give us our first look at the standard-wheelbase fifth-generation Range Rover – which is helpfully identified by this mule’s appearance alongside the new Land Rover Defender. It retains the same boxy proportions as the current car, with the same flat bonnet and similarly bluff front end.

The heavy camouflage around this development mule’s nose and flanks makes it difficult to pick out specific styling updates. However, we expect the SUV’s headlights and tail lights will adopt a sleeker Velar-inspired look compared to the current model.

Past and current iterations of the Range Rover have offered buyers a spacious layout with luxurious accommodation for four adults – and we expect that will remain the case with this new model. Our previously spied long-wheelbase version should also give buyers the option of an executive seating pack for the second row, which adds two larger rear seats that have a far greater range of adjustability for added comfort.

Elsewhere inside, Land Rover’s next-generation 10-inch touchscreen infotainment system, first used by the all-new Defender, will also likely feature. In the Defender, the unit features a powerful pair of processors and Blackberry operating system, which allows the system to perform both entertainment functions (such as music streaming) and over-the-air updates without any appreciable loss in performance.

While technical details are still some way from being confirmed, it’s certain that electrification will play a heavy part in the Range Rover’s engine line-up. It’ll be one of three cars that we know will utilise Land Rover’s MLA platform – the others being the all-new Range Rover crossover and the next Range Rover Sport.

MLA can support a fully electric twin-motor setup, but such a powertrain isn’t expected to be offered from launch. What is certain is that mild and plug-in hybrid units will be offered as JLR’s looks to strengthen its range of electrified powertrains.

Are you looking forward to seeing a new Range Rover? Let us know your thoughts in the comments below…