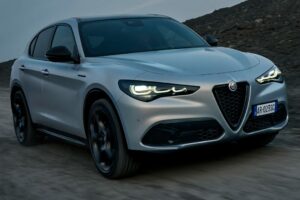 In a bid to keep its Stelvio SUV competitive with the likes of the BMW X3, Porsche Macan and new Mercedes GLC, Alfa Romeo has given its mid-size premium model a refresh inside and out, with first deliveries of the new car coming in early 2023.

Like the Giulia, which has also been given similar updates for 2023, the Stelvio’s mild facelift comes with a boost in technology, as well as a new line-up that now falls in line with the trim structure for the brand's smaller Tonale SUV. The newly updated Stelvio is available in entry-level Sprint, mid-spec Veloce and range-topping Competizione trim levels, while the hot Quadrifoglio version should receive similar design and tech updates later in 2023.

The improvements in question are fairly minimal on the exterior. The headlight units feature three individual lights, just like the Tonale. The lights themselves now offer LED adaptive Matrix technology so the beam can adapt to oncoming cars so as not to dazzle their drivers, while the ‘Tribolo’ grille, as Alfa Romeo calls it, has been given a new paint finish.

Competizione models sport twin exhaust pipes to reinforce its status as the sportiest model in the regular range, complemented by a diffuser element in the bumper. There’s also a panoramic roof and wheel arch trim finished in gloss black. While the Giulia gets smoked rear lights, the Stelvio gets a set of transparent clusters.

There are more changes inside with the addition of a 12.3-inch digital dash. The instrument cluster can be configured with three different styles: Evolved, Relax and Heritage. In Evolved mode the speedometer and rev counter sit either side of a central information readout. Relax reduces the level of information on display for a less cluttered look, while Heritage offers a more retro design.

The new Stelvio’s engine range consists of Alfa’s 276bhp 2.0-litre four-cylinder turbo petrol engine as well as the 207bhp 2.2-litre four-cylinder diesel. Both motors are mated to an eight-speed automatic transmission driving all four-wheels through Alfa Romeo’s Q4 all-wheel drive set-up. The Stelvio sits on the same Giorgio platform as the Giulia, meaning it features a double wishbone suspension set-up at the front and multi-link axle at the rear.

Alfa Romeo hasn’t released pricing for the updated Stelvio but we expect a small increase over the outgoing 207bhp diesel car’s £52,449 starting price given the extra style and tech on offer.