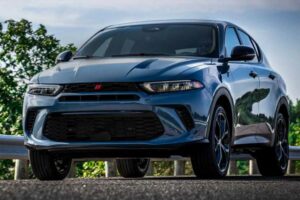 The “quickest, fastest, most powerful compact utility vehicle under $30,000” – this is how Dodge described the all-new Hornet when it released official information about it earlier this month. The American firm is especially proud of its first new model in a decade, though another member of the big Stellantis family is apparently not quite happy with the launch of the new product.

The Hornet is largely based on the Alfa Romeo Tonale and the two share many body, powertrain, suspension, and interior components. The crossover started as primarily an Alfa Romeo project and The Drive reports the Italian manufacturer isn’t happy with the fact that Dodge got nearly all the job done and simply had to put a new badge and different bumpers to launch the Hornet and undercut the Tonale’s price.

“Dodge took advantage of the [Tonale] to make a compliance car – their Aston Martin Cygnet moment, if you will. Suffice it to say internal politics won the day, and Dodge needed to up their CAFE numbers, so Hornet was born,” a source within Stellantis told the publication “on condition of anonymity.”

While almost identical, the two crossovers are positioned in different spectrums of the compact crossover segment. In general, the Hornet should undercut the Tonale by around $10,000, which makes it even more difficult for Alfa Romeo to sell its new product in the United States. Some call the Tonale Alfa Romeo’s most important new model in years as the Italian company has big hopes it will perform better than the Giulia and Stelvio in North America.

However, with the very similar looking and significantly cheaper Dodge alternative, it seems that Alfa Romeo’s strategy could be in trouble, hence why the company is not really happy with the situation. Dodge, in turn, received nearly 14,000 preorders in just 24 hours after the crossover’s full debut.

Reader response in the comments section of our Dodge Hornet debut article, however, suggests many Dodge fans are not satisfied with the Hornet either. Sharing its platform and hardware with the Alfa Romeo Tonale, it seems some folks feel the American automaker didn’t do enough to differentiate the Hornet from its Italian sibling.