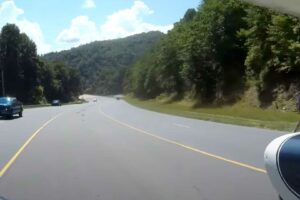 Who would have thought that an innocent Father’s Day gift will turn into a death-defying spectacle? That’s exactly what happened with Vincent Fraser, a Marine veteran from Florida, who took his father-in-law on a quick flight over a newly bought property as a Father’s Day present.

As both Fraser and his in-law headed back from the trip, things turned sideways. The engine of his 1967 Aero Commander 100 failed mid-flight, dropping from an altitude of 5,000 feet to just 1,000. This prompted Fraser to employ a maneuver he has never done before – an emergency landing.

Fraser, at the time of the incident, just got his license to fly in October 2021 and only had under 100 hours of cockpit experience. His life as a Marine hardened his will, though, enabling him to finish the brave maneuver on a public thoroughfare.

The incident happened in North Carolina, NBC News reported. According to Fraser, the first option was to land on a bridge, but it was too narrow and busy at that time. He originally decided to go for the river then he noticed Highway 19 on his left.

Fortunately, the highway wasn’t too busy that time. Evading power lines and other road users, Fraser nailed the landing without incurring any damages to other vehicles or to himself and his passenger. The whole emergency landing sequence was shared through Fraser’s YouTube video (embedded atop this page).

According to NBC News, the plane was towed to a nearby shop to repair the plane’s damaged engine. Three days later, authorities shut down a portion of Highway 28 to let the plane take off and proceed to a proper airport.

Fraser flew back to Florida on a commercial flight and decided to continue flying planes, albeit, not anytime soon.

“I think I’m going to keep going. I just need some time away from the plane. I’m just glad to be alive and glad that no one was hurt,” Fraser told NBC News.