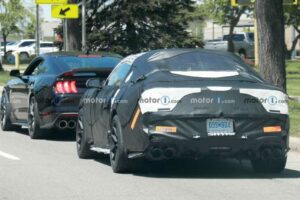 The seventh-generation Ford Mustang is coming soon, and it will retain a V8 engine under the hood. Special packages and higher-powered variants above the GT are virtually guaranteed, but the nature of those models is still unknown. New spy photos from Dearborn suggest a Mach 1 could be among them.

A single prototype wearing heavy camouflage was spotted on the street, and it looks rather aggressive. It rides on a wheel/tire combo we haven’t seen before, and there’s no missing the big quad exhaust outlets at the rear. By itself, we wouldn’t necessarily think Mach 1 as that’s been a limited-run trim over the decades, save for the second-generation Mustang II where it was an appearance package. But this particular prototype is photographed following a new Mach 1, and we can’t ignore similarities with the tire width and exhaust finishers. There are also massive brakes visible behind the front wheels.

That said, the prototype doesn’t appear to have a big Mach 1 spoiler on the decklid. Moving forward, the hood and front fascia look similar to previous spy shots that we believe show a GT prototype. The big wing and prominent chin spoiler are available on the Mach 1 in Premium trim, but the standard version nixes those items for a subtle appearance. In short, we can’t say one way or another that this prototype is a next-gen Mach 1. The fat tires, big brakes, and bold exhaust tips could represent a GT performance package, a Shelby model, or even a new Boss. But the fact that it’s following a Mach 1 is certainly interesting.

In the last 40 years of Mustang history, only four have featured a Mach 1. The 2003-2004 model marked the end of the fourth-generation pony, featuring a naturally-aspirated version of the Cobra’s DOHC V8 with a shaker hood, making 305 horsepower. The moniker was resurrected in 2021, offering a mix of Shelby suspension and aero components with a tweaked 5.0-liter V8 making 480-hp.

The seventh-generation Ford Mustang will debut in 2023 as a 2024 model.