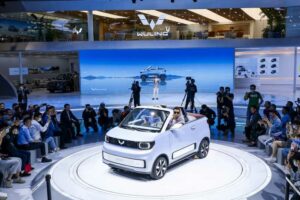 In 2021 General Motors-Wuling (GM-Wuling) revealed the Hong Guang MINI EV Cabrio (not to be confused with MINI of the BMW Group) at Auto Shanghai. The model is a soft-top take on one of the brand’s most popular EVs, and it turns out that this convertible could prove to be even more popular than the similarly cute hardtop version.

According to a story from Automotive News, the Hong Guang MINI EV is set to launch this year and the automaker is expecting demand for the two-seater to be through the roof. Anyone who wants their own EV Cabrio will need to do more than just show up at the dealership with cash in hand.

Potential owners will have to enter a lottery for a chance to buy their own EV Cabrio and the participants won’t even know if they’ve won a spot until later in September according to a statement from Zhang Yiqin, Wuling Motors’ head of branding and marketing.

The reason why a lottery system is necessary is because Wuling is only committing to building 100 to 200 cars a month, with production ramping up as demand grows. At the moment, the final price of the EV Cabrio hasn’t been confirmed yet but Yiqin suggested that MSRP will sit between 100,000 yuan and 200,000 yuan ($14,500 and $29,000).

Wuling decided to build the EV Cabrio after loyal customers of the base Hong Guang MINI EV began begging the brand for a convertible model. There were 426,000 sales of the original Hong Guang MINI EV in 2021, making it the best-selling EV in China last year. The EV beat Tesla’s 2021 sales by over 100,000 units. The record sales could largely be attributed to its affordable starting price of 32,385 yuan (approximately $4,700) and happy looks.

Considering its previous sales and the consumer brand loyalty in China, we wouldn’t be shocked if Wuling decides to ramp up monthly production significantly.

With California currently pushing through a law to force all new car sales to be EVs in 2035, perhaps the success of the Hong Guang MINI EV in China will inspire GM to finally produce the affordable electric vehicle that Americans have been waiting for. Cheap? Cute? The rare electric convertible? Check, check, and check!