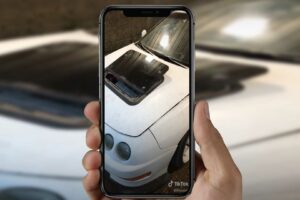 It’s a neat way to reveal the engine.

Some car mods leave you scratching your head about the owner’s decision to dedicate the time and effort to install them on a vehicle. For example, lots of cars, particularly ones with mid-engine layouts, have transparent covers that let people see the powerplant. Well, this guy did that by installing a sunroof in the hood of an Acura Integra.

The video is from Tiktok so we don’t get a very long look at this panel in action. The sunroof appears to be the type of third-party panel that someone can install after purchasing a vehicle, rather than from the factory.

The panel is still fully functional with tilt and slide functionality. When open, the hole is in the perfect location to expose the transverse-mounted Acura four-cylinder engine. The red spark plug wires add an extra visual pop to the view.

Having a panel in the hood to view the powerplant for a front-engine car isn’t a unique idea. Chevy has done it on the Corvette, including having a polycarbonate window for viewing the intercooler on the C6 ZR1. The classic shaker-style hood did something similar, too.

The setup doesn’t appear to offer any performance improvements. The opening in the hood doesn’t look close enough to the intake to let the Integra breathe better. It would let heat out of the engine bay, but this seems to be a stock engine, so any improvement in cooling probably isn’t necessary.

Still, opening the sunroof to reveal the powerplant is an impressive showpiece. It would be cool to give the Acura a surprising engine swap and then open the panel to reveal what’s under the hood.