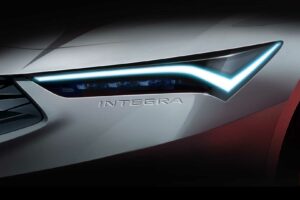 The original was available as a hatchback, too.

In a confusing sea of three-letter model designations for sedans and SUVs, an actual name will soon return to the halls of Acura. It’s not just any name either – the Integra moniker endured for nearly 20 years and helped launch the luxury brand alongside the much-loved Legend in the 1980s. Throughout its life the Integra was offered in a range of body styles, but Acura is being cagey on whether the new version will be as versatile.

We do know it will not be an SUV or a crossover. An official teaser image from Acura portrays a sharp, relatively shallow front face not unlike the current TLX. Furthermore, Acura gave us an overall outline of the Integra’s body with a cool airborne drone show during the NSX Type S reveal. The Integra looks low and long, and our initial impression is one of a swoopy two-door fastback. However, when Motor1.com pressed Acura for more info, a spokesperson wouldn’t confirm or deny the new Integra having two doors, four doors, or a choice of body styles. In short, everything is on the table.

It’s widely believed the new Integra will utilize the bones of the current Honda Civic for its chassis, and we know Honda dropped two-door offerings for US buyers. That’s a qualified argument for a four-door Integra, but the body outline from the NSX drone show sure does give us two-door vibes. And we can’t help wondering how a four-door Integra would slot in Acura’s line with the TLX and ILX sedans already there. With the two-door NSX exiting the scene, a two-door replacement with the Integra certainly makes sense. Then again, four-door “coupe” body styles are all the rage these days.

Additionally, in 2020 we reported on an alleged leak of Acura dealership info regarding a new Type S compact sedan launching before 2022, and there was no mention of a new coupe or hatchback. Of course, that leak came in the middle of the first COVID lockdown and long before the microchip shortage was a thing, so current production plans for new models are likely behind schedule.

Whether it boasts two doors or four, we suspect the new Integra will garner attention when it finally debuts. According to Acura’s social media posts, that should happen in the spring of 2022.