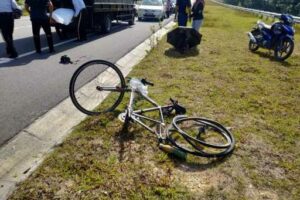 A research officer pleaded not guilty and claimed trial at the Seremban Magistrate’s Court on a charge of dangerous driving causing the death of another on the Temiang-Pantai road. Munirah [email protected] is facing a charge of dangerous driving on the morning of June 1 on the Temiang-Pantai road, resulting in the death of Khalid Md Isa, aged 72.

The accused is charged under Section 41(1) of the Road Transport Act 1987 and upon conviction will face a fine of not less than RM20,000 to a maximum of RM50,000 as well as a prison sentence of between five to 10 years. Public Prosecutor Assistant Superintendent M Shanmugavel requested the court set bail at RM5,000 and for the accused’ driving licence to be suspended while proceedings are ongoing.

Munirah, who was unrepresented, requested reduced bail, saying her husband works in another state and she is nursing a child. Magistrate Intan Syafinaz set bail at RM3,500 with one surety and suspended her driving licence. The case is set for mention on June 21 to allow Munirah to appoint a lawyer.