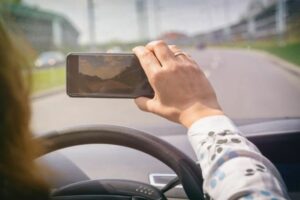 RAC's CEO warns of using a handheld phone while driving

Channel 5 series Motorway Cops: Catching Britain’s Speeders follows the units who patrol the UK motorways. They operate on the M6 in Cheshire, which is the deadliest motorway in the UK, with around a dozen fatalities a year.

Following a crash involving three HGVs on the motorway, both lanes of traffic were shut by the police.

This was done to clear the debris from the vehicles off the road and help one of the drivers who was seriously injured and later passed away.

The crash, which saw hundreds of smashed bottles across the motorway, saw three HGVs smash into each other.

When looking to open the opposite carriageway, Anton found many people walking on the Northbound carriageway, with some even walking their dogs.

He said: “People don’t consider the consequences of their actions. It can hinder the emergency services and that will often increase the delays.

“We don’t need any more tragedy on the road and it’s a simple thing like staying with your vehicle.

“If you need to get out, stand next to your vehicle, but don’t go taking your dog for a walk across the carriageway because you don’t know what’s coming.”

After nearly two hours, traffic on the opposite carriageway was finally being allowed to move, under police escort.

Another officer caught a driver trying to reverse up a slip road, adding to the confusion on the roads.

Inspector Sullivan continued: “What tends to happen, all the public who are driving past are looking at what is happening here.

“I know people feel they can’t help it but they’re not watching what’s happening in front of them.