Home » Car Reviews » “A Tesla merger? How about one with Volkswagen?” 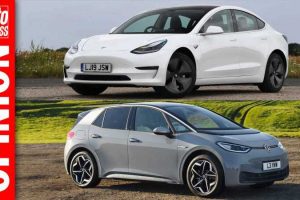 With Elon Musk saying if a merger with another firm were on the cards he “would have this conversation”, and Volkswagen streamlining its operations, could VW and Tesla join forces? 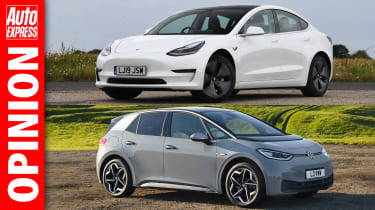 Mergers between huge car companies are nothing new. The recently formed Stellantis brand, a union between Groupe PSA and FCA, brought together 14 individual firms including Maserati and Vauxhall, the latter of which was only acquired by its PSA parent three years ago.

With manufacturers across the world keen to pool resources, development costs and, increasingly, carbon-dioxide emissions, sense is to be found in the prospect of a merger between EV maker Tesla, and Volkswagen Group. Because while VW Group’s push into electric cars is now fully underway, the German manufacturer’s fleet average CO2 emissions stood at 123.6g/km as of March this year according to analysts at Jato, against a European Commission target of 95g/km for 2021.

Car makers not meeting that fleet 95g/km target face big fines and some firms, such as FCA, have already paid to ‘pool’ their emissions with Tesla in order to offset potential penalties. A full-blown VW/Tesla partnership would presumably have a significant impact on Volkswagen Group’s fleet emissions. VW Group, meanwhile, could apply its almost peerless mass-production know-how to Tesla’s cars.

There are other indications that a merger between Tesla and Volkswagen Group could be possible. Tesla boss Elon Musk recently said: “We are definitely not going to launch a hostile takeover, but if somebody said it would be a good idea to merge with Tesla, we would have this conversation.”

Automobilwoche said Diess wrote: “What worries me the most is the capabilities in the assistance systems. 500,000 Teslas function as a neural network that continuously collects data and provides the customer a new driving experience every 14 days with improved properties. No other automobile manufacturer can do that today.”

If one starts with the premise that a merger is on the cards, more evidence emerges that indicates this could be a possibility. Volkswagen Group is selling hypercar maker Bugatti to Rimac, according to reports, while rumours indicate the German giant could also sell Lamborghini.

Other streamlining, cash-releasing operations include the recent announcement that Volkswagen is to halt all motorsport activities, integrating staff from Volkswagen Motorsport GmbH into the main Volkswagen AG company. Tesla, meanwhile, is brimming with cash, at least in terms of stock-market valuation, overtaking Toyota this summer to be the most valuable car maker in the world, with its share price climbing ever since.

Speculation of a merger between Volkswagen and Tesla is just that, and it is possible these signs are incidental, and signify nothing. But if a merger is announced between the world’s most highly valued car maker and the largest manufacturer by volume, you read it here first.

Do you think a Tesla-Volkswagen merger could happen? Let us know your thoughts in the comments section…