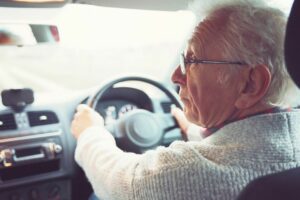 The cost of car insurance has increased across the board in the first three months of 2022, however drivers over the age of 50 are suffering more than any other group. Older drivers have seen their premiums jump 6.2 percent since January.

And people over 50 have reacted with anger to the increases, with many believing that the companies are profiting without delivering any benefits.

After Express.co.uk reported on the jump in premiums, many drivers commented on the news and were appalled.

Site reader ‘Martin H’ wrote: “Why should loyal older drivers be penalised just because cheaper introductory prices have been scrapped for new customers? Is there a logic I’ve missed?”

And ‘Rafbel’ added: “Older drivers over 50 are safer drivers than the young.”

Another commenter ‘WR2’ said: “I have not had an accident in over 10 years, I am 75 and have a full clean licence for over 10 years.

“This is discriminating against careful old drivers. I thought discrimination was illegal.

“Up the premiums for the boy racers and the man in a van who needs to get there yesterday.

“They race past me and I meet up with them at the next traffic lights.”

‘Percyveerance’ was another who accused the insurers of profiteering, writing: “Smells like insurance companies assume older drivers are the ones who can afford the additional premiums, regardless of the driving history of the younger.”

‘Mrgeejayel’ added: “Is there anything in this country that isn’t a rip off?”

“Renewal was quoted as £80 more than last year. Nothing had changed, if anything less mileage done.

“Told company wasn’t renewing. Went on comparison site got it to £5 less than last year with well known company, not some hooky backstreet gang.

“Don’t simply automatically renew; companies are still profiting from drivers not bothering to look for deals.”

Finally, older driver ‘Wych1’ had advice for anyone over 65 when renewing, writing: “Each year I check with confused. com or a couple of other sites every time my renewal invites arrive.

“This year I managed to reduce my premiums by about £300. It’s not £300 cheaper than last year just £300 less than the renewal invitations.

“Because I have established accounts with these websites all my details are there already. So it only needs to check if the information is still correct and you can obtain new quotes very quickly.

“Word of Caution be careful to read the information given on things Like Auto renewal or Black Boxes because they could just renew and you won’t be aware until it’s too late.

“Don’t forget to send your renewal invitation to your new insurers as proof of NCB, usually you can just upload it to the new insurers they will make it easy to do but not always needed.”