‘A real honour’: Car SOS stars open up on their most ‘moving’ classic car restoration 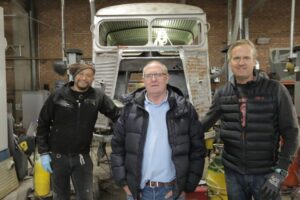 Car SOS: Experts take a look at a Metro 6R4

The show is currently showing its tenth season, with Tim Shaw and Fuzz Townshend working their magic to help petrolheads restore their classic cars. In potentially their most emotional episode ever, the Car SOS team come to the aid of the Howe family and their Citroen HY Camionette van.

In 2017, builder Steve Howe and his wife Alison were looking for a fun project that their two daughters could get involved in and that Alison could make a bit of money from, as she was planning to retire after being a nurse for 30 years.

They settled on the idea of buying an old Citroen HY van, with the aim of restoring it and converting it into a milkshake and coffee van to take to festivals and football games.

They found a decrepit van through the HY owners club and towed it back to Manchester where Steve set about having the engine rebuilt and putting a new floor in, with their two daughters – Darcie and Sasha – taking an interest.

Sadly, the restoration was not completed following the death of Alison and her friend, who were tragically killed in the Manchester Arena bombing where Darcie was attending the Ariana Grande concert.

Tim and Fuzz praised the family for their courage throughout the sad times, saying: “He [Steve] is only now starting to find some sense of closure. Although doing well at school and now college, Darcie (now coming up for 20) refuses to speak about the event.

“The Citroen van has sat on the drive for the last four years – a reminder of what might have been, but it was Steve that contacted us hoping that perhaps Car SOS would get involved and realise his wife’s last dream.

“He would love to get Darcie and sister Sasha up and running in a family mobile milkshake business.”

The van was in need of a complete restoration, from top to bottom, with the Car SOS team working to transform the van into a mobile milkshake business.

Fuzz said: “The floor is missing, but Steve has replaced it with a plywood floor although as it has been standing outdoors for the last four years even that is starting to rot.

“The engine was running four years ago but will need a full inspection.

“Running gear, steering and brakes will all need to be started from scratch.”

The emotional reveal of the refurbished van took place at Manchester United’s stadium, Old Trafford, where Steve is a season ticket holder.

Tim and Fuzz were joined by Manchester United legends Bryan Robson OBE and Wes Brown to unveil the vehicle to Steve and the family.

Bryan Robson said: “It’s been a real honour to be part of Car SOS, especially appearing in such a moving episode with a very special story.

“Manchester has always been a place very close to my heart for obvious reasons, so to help with this reveal at Old Trafford was something really special.

“Darcie and the rest of the Howe family are really deserving of this and I wish them all the best with their future endeavours.”

Fellow former Manchester United player, Wes Brown, said: “It has been a privilege to take part in the Car SOS and to play my part in helping to reveal Darcie’s beloved van to her.

“It’s such a fitting tribute to remember her mum, Alison.

“I sincerely hope it helps bring some joy to Darcie after losing her mum under such tragic circumstances.

“I wish Darcie and the rest of the Howe family the best of luck with their new business venture – I’ll be sure to buy a smoothie if I see the van about in Manchester.”