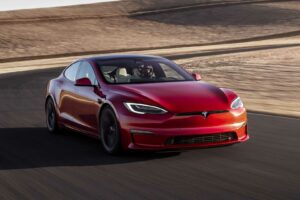 He believed in Tesla early on and took the plunge.

I decided to move to South Florida from the Big Apple. It was 2011, and I just got married. I was also (soon after) blessed with a beautiful baby girl. My life was changing, fast. One day, at my parents’ house, my father called me into his office. He was amped. He pointed, enthusiastically, at the computer screen and said, “Check out this new car! I’m going to get one. It’s called a Tesla.”

A what? I said, “Isn’t that the new Maserati?” He shook his head, “No, it’s a Tesla Model S. And it’s electric.” Whoa. The sedan was certainly stunning. But an electric car? I wasn’t surprised. My father was always into new tech before others. When I was a kid, he bought an Apple Macintosh (serial number 000787) back in 1984. Fast forward: it was time for him to get his hands on another revolutionary product — a Tesla Model S (VIN number 000184) in 2012.

My Dad had been participating in the Tesla forums and started a popular thread about designing the first-ever accessory, a DIY project mind you, for the Model S. It was a center console insert that he was building in his garage. Forum regulars pressed him to make one, commercially available, for their Tesla. My father asked me to put together a splash page on the web for those interested, a wait list of sorts. It grew, quickly, to a few hundred names. So, sure enough, my Dad was right. Tesla took off. A few years later, we recruited my brother Mike. He moved his whole family from Los Angeles and also took the plunge. Let’s do it, we thought, a business built around the mission of Tesla. Risky? Sure. But, Tesla was gaining traction. And we, as a family, were in this together…

Looking back, it’s been a wild ride. My father is, needless to say, the heart and soul of our business. And our lives. We can’t thank him enough for this amazing adventure.

Now, we all drive a Tesla. So does my wife. And my Mom even ferries her Model X to the office so she can help out too! We think it’s wonderful to work hard and build a family business. In addition, it’s really pretty cool to be involved in a much larger Tesla family that’s growing, every day, all over the world.

This Father’s Day, Dad, we just wanted to extend our overwhelming thanks, appreciation, and gratitude for everything you do… Lots of love, Matt and Mike.