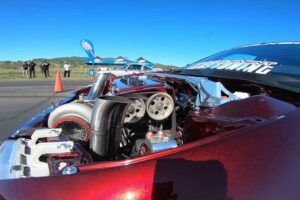 Here’s an unlikely but interesting automotive showdown. We don’t often see classic Porsches engaging in drag racing, but that’s not stopping the owner of this old 911 from having some straight-line fun. As for the competition, it’s just your average 30-year-old Honda Civic. No problem for a 911, right?

Admittedly, the Honda is far from average. As you can easily see in the latest Hoonigan This vs. That video, the hatchback’s engine is so beefy there isn’t even room for the hood. The mill is borrowed from an old Integra, and we won’t bore you with the lengthy list of upgrades. Just know that, with a massive turbo pushing air into the cylinders, it’s estimated to make around 600 horsepower to the wheels. It’s estimated because the Honda’s tires were spinning during dyno testing. So yeah, it’s got serious power for this race.

Fortunately, so does the Porsche. Technically speaking, it’s a 1978 911 but it’s built as a tribute to the 1973 911 Targa Florio race car. In this instance, restomod is also an appropriate description as there’s a 3.4-liter twin-turbocharged flat-six at the back making 595 hp. It’s still air-cooled, and its owner loves carving canyons on the weekends. Despite its race car ambiance, it’s a legit street car complete with working air conditioning. Also, it carries most of its weight over the drive wheels. That could be a factor in this competition.

By that, we mean it’s definitely a factor. In the first of three races, the Civic gets a healthy jump off the start but struggles with traction for nearly the entire 1,000-foot run. That much power in a front-wheel-drive car on street tires is a handful on a prepped drag strip, never mind an unprepared runway. As a result, we get an extremely close race with the Porsche driver clawing back at the very end to win by half a car length.

Race two sees an even launch between the competitors, but the Honda just can’t hook up. Meanwhile, the 911 makes good use of all available power, and it crosses the line several car lengths ahead of the Civic. With two victories out of three, the event win goes to the 911. However, a bonus race is held with the cars starting evenly from a 40 mph roll. This helps the Honda with traction, but is it enough for the hatchback to claim at least one win against the classic Porsche?

For more 911 love, check out the Rambling About Cars podcast where we discuss the new Porsche 911 Sport Classic.