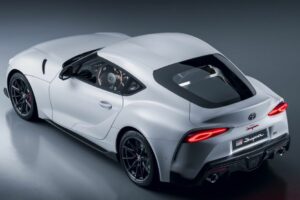 While a big part of the Festival of Speed’s appeal is the chance to see fast cars of yesteryear belt up Goodwood Hill while making fabulous noises, it also provides the opportunity to get up close and personal with some of the most exciting new cars on the horizon.

2022 is no different, with a wide selection available for your viewing pleasure up the hill climb plus static viewing in the paddocks and other festival areas. One of these will even be enjoying its global debut at FoS.

Which will you make a beeline for?

Yes, BMW has – at last – made an official M3 Touring, and we’re pretty sure it’s the M Car the company has promised to reveal at the Festival of Speed. It’ll be powered by the same ‘S58’ inline-six as the saloon, meaning it’ll make 503bhp in Competition form. And yes, it will still have that grille, but hopefully, you’re used to the look by now.

The latest Ford Ranger Raptor has already been revealed and shown off in public, but FOS will allow the widest audience yet to have a gander. While the 2.0-litre diesel engine will be installed in the Baja-inspired pick-up eventually, it’s initially available with a petrol V6. That should provide a rather more interesting soundtrack for Goodwood spectators.

Admittedly, the GMA T.50 has already been driven in anger at a Goodwood event. The McLaren F1’s spiritual successor made its dynamic debut at the 78th Members Meeting, giving the world its first proper chance to hear the 12,100rpm-capable, Cosworth-built V12 really sing its heart out.

Given that there won’t ever be another new car like this, however, it’s awesome that the T.50 will be at the Festival of Speed for as many petrolheads as possible to experience it. Murray’s masterpiece is sure to be the best-sounding piece of new metal at the show.

An all-new, manual sports car in 2022? You’d better believe it. In fact, the Festival of Speed debut of the stick-shifting GR Supra marks the second year in a row that Toyota has brought such a car for the masses to see at FOS, with the Japanese manufacturer giving punters an early preview of the GR86 at the event in 2021. Oh, and that car will be doing the rounds too. Sports car fans rejoice!

Toyota as good as called the Electrified Sport a Lexus LFA successor, when company president Akio Toyoda described it as possessing the “secret sauce…cultivated via the development” of its seminal V10 supercar.

FOS 2022 will be the first time the concept is seen by the public outside of Japan, in what should be a very early preview of the production version – with talk of that car being powered by solid-state batteries, it won’t be hitting showrooms for many years yet. As the concept is a model rather than a functioning car, it’ll be on static display at the EV-dedicated Electric Avenue area of the festival, rather than blasting up the hill.

More manual coupe goodness will be coming to FOS from Porsche (who else), in the form of the 911 Sport Classic. This is a name the German manufacturer has used before, but for the 992-generation 911, it means taking a 911 Turbo, ditching the all-wheel drive system, and fitting a seven-speed manual transmission. Good for 543bhp, it’s the most powerful manual 911 currently available.

The event will be held 23 – 26 June this summer and only a few tickets remain for Thursday and Friday. Tickets and packages can be found at goodwood.com/FOS