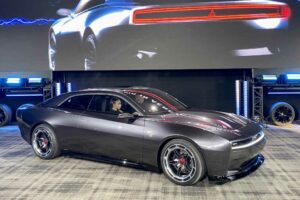 The future’s so bright, Dodge is throwing shade. At the culmination of Dodge Speed Week on Wednesday, the American muscle car brand revealed the products of its two-year business plan in a manner befitting the performance brand’s machismo.

The V-8 engine will be discontinued at the end of 2023, along with the Challenger and Charger muscle cars, as well as the latest iteration of the Dodge Durango SRT Hellcat. As part of the performance brand’s transition from gas-guzzling performance cars to electric vehicles, Dodge launched the softer, friendlier, more accessible 2023 Dodge Hornet small crossover powered by small turbo engines and a plug-in hybrid variant.

However, the biggest news during this heady week to the ramp up of the Woodward Dream Cruise in Detroit, came in stunning concept form with the unveiling of the Dodge Charger Daytona SRT Concept vehicle. The electric muscle car wowed audiences and won the internet with its Dodge approach to emission regulations, political correctness, and the perceived sacred cows of electric vehicle adoption.

“This is not the EV they want you to have,” Dodge CEO Tim Kuniskis crowed to a live and streaming audience on Wednesday. “This is a Dodge EV.”

The gorgeous concept car with production intent honors Dodge’s past with unusual technology on an electric car, including an exhaust system, a multispeed transmission, and a three-door hatchback shape. It eschews the “jelly bean” shape Kuniskis says proliferates on the electric crossover space today, and instead opens the door to a new era of electric muscle cars.

Here are five things we learned in our time checking out the Dodge Charger Daytona SRT Concept in person this week.

Automaker images don’t do it justice. Streaming it virtually and flicking through online images cannot come close to reproducing its gorgeous proportions and muscle car cues, with inspiration modernized from the 1968 Dodge Charger. The long sculpted hood skips heat extractors and vents for a nose that dips down into what Dodge calls an R-Wing design, with two open aero chambers that let air slide up the hood and over the raked windshield. Both the front and rear end are vertical, extending out at the top in classic 70s muscle car style. But how the rear resolves, with the sleek hatch glass tucking into the fat haunches is much more than modern.

“This is not a science project. Some concept cars are. This one is not,” Kuniskis explained in a press conference the week before the reveal. “Everybody else is going with a two-box design that’s higher because of the battery, you guys know where that direction is going. We’re trying to go in the exact opposite of this. This is the future design direction to replace those muscle cars.”

It’s a two-door coupe. No, it’s a three-door hatchback. However Dodge decides to market the production car, it cannot and will not be a crossover SUV or utility vehicle of any kind. But that long low hatch leads to a lot of usable space, by our eyes. The 2+2 seating configuration appears much more usable than in current muscle cars, with plenty of leg room.

This is a curiosity. With the exception of the Porsche Taycan’s 2-speed transmission, most electric vehicles have a single speed transmission because linear electric power doesn’t benefit from various gear ratios. Dodge doesn’t care.

“Everybody knows EVs are fast, even the boring ones are quick. The instantaneous torque is impossible to deny,” Kuniskis explained. “But the visceral experience of a muscle car is more than that. It’s more chainsaw than it is cordless drill.”

Dodge wouldn’t disclose the number of gears in the electromechanical system, or how it works other than pulling out torque for “250 milliseconds” then adding it back in. Even though Kuniskis admitted that it will make the car slower and heavier, there’s another element that’s more important.

He suggested the performance benefit will be much greater traction off the line. That’s the Dodgiest thing ever.

Even more curious, and most polarizing, is the Daytona Charger Concept’s exhaust sound system. Instead of artificial noises amplified through the speaker system in the cabin, the chambered exhaust system inspired by church pipe organs, produces up to 126 db of sound from the rear of the car. Kuniskis said the sound is meant to mimic the cadence—not the tone or pitch—of the firing order of a Hemi V-8.

The low-slung three-door hatchback honors the Dodge Charger Daytona that was the first vehicle to break 200 mph on a NASCAR track in 1970, according to Dodge. Dodge didn’t release specs on the concept, other than the Banshee propulsion system will be built on an 800-volt architecture with nine power levels. Kuniskis suggested the Charger Daytona SRT Concept is production bound.