Home » Car Reviews » 5 Classic Jeeps You Should Own Before You Die! 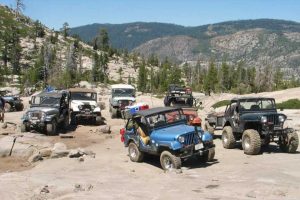 There’s just something about a Jeep. They’re not only a vehicle, they’re a lifestyle. Like Harley-Davidson, Corvette, and other of transportation that achieve cult status and take on a whole cult following of devoted fans. But instead of wallets with chains and black leather vests like Harley drivers, or khaki cargo shorts and gold chains like Corvette owners, Jeep folks are stereotyped as having their own little two-finger wave. The joke being that any more digits taken off the steering wheel would result in an uncontrolled crash. But whatever the case, Jeeps are cool, and the people who own and drive them are usually pretty darn nice. But no matter what the case, if you’re thinking of joining the ranks of millions of enthusiastic Jeep owners, don’t automatically jump straight into a modern Wrangler, Compass, or Cherokee. Here are five classic Jeeps that I think every person should own and experience before they die.

If you dive deeply enough, there are dozens if not hundreds of differences between the various models of flatfenders. Some people like myself can almost smell the difference between a Ford or Willys WWII-era GPW or MB, can distinguish a VEC CJ-2A from a later production CJ-2A, or can at a glance distinguish a CJ-3A from a military M38. But then again, I can’t tell you how many WWII movies from the early 1950s I’ve watched in which some major is being chauffeured to the front lines in a CJ-3A. But no matter which flatfender strikes your fancy or fits your pocketbook, every Jeep enthusiast just has to experience what it’s like to float the valves on a 60-hp flat-head four-cylinder Go Devil engine as you row through the gears of your T-84 or T-90 three-speed trying to reach your max velocity of 45-55 mph, and then praying you’re able to panic stop with four 8-inch drum brakes juiced by a teeny single-pot master cylinder. Flatties are super small, very nimble, and exceptionally capable off-road. Not to mention a ton of fun. Driving a stock flatfender is just one of those Zen experiences that connects you to the origins of the “Jeep thing” while forcing you to slow down and smell the flowers…and gear lube.

Some Buick automobiles in the early 1960s were powered by a funky V-6 engine that was created almost literally by lopping two cylinders off a Buick V-8 engine. Because the cylinders and firing order were balanced to accommodate eight firing pulses, the V-6s had an “odd-fire” firing pattern in which two firing pulses were missing. Heck, a Buick Odd-Fire distributor cap is just a V-8 cap with two of the cylinder plug locations missing. This not only gave these engines their Odd-Fire moniker but also a very distinctive shuffling chatter at idle that almost sounds like a WWII radial aircraft engine.

In 1964, Kaiser bought the tooling for these engines from Buick and began offering them in its CJ lineup in 1966, renaming the engine “Dauntless.” The early one-barrel Dauntless engines used in 1966 put out 155 hp, but for 1967 a Rochester two-barrel upped power to 160 hp and 230 lb-ft. In addition to the increased horsepower, these engines used a very heavy inertia flywheel to help reduce stalling and help maintain speed on grades. And it’s mostly because of this inertia flywheel that the Buick 225 Dauntless engines in 1966-1971 CJ-5 or CJ-6 or 1967-1971 C-101 Jeepsters have to be experienced.

There are anecdotal tales of T98 four-speed and T-90 three-speed transmissions from the factory in these vehicles, but the vast majority of CJs will have the T-14 three-speed transmission, with some TH400 three-speed autos offered in the Jeepster. Having owned a couple myself, my personal preference is the V-6 CJ-6 with the three-speed manual. Off-road it’s a riot, with the engine able to lug itself down to what sounds like 250 rpm without stalling. They’re sprightly on the road, fun between stoplights, and with an aftermarket overdrive, capable of delivering 17-18 mpg in mixed town/highway driving.

Mechanically speaking, the 1972-1975 Jeeps are the best early Jeeps made. After AMC took the company over from Kaiser, it retooled much of the lineup, extending the front wheelbase of the CJ-5 and CJ-6 by 3 inches to accommodate a longer hood and fenders that covered AMC’s inline six-cylinder engine. But while I really like the AMC 232 and 258 I6, it was the availability for the first time ever of a V-8 in a Jeep Universal that made big news. While on paper the AMC 304’s 150 hp/245 lb-ft seems comparable to the Dauntless V-6’s 160 hp/230 lb-ft, the power rating of the V-8 was net power, while the V-6 was gross. It wasn’t a real apples-to-apples comparison, and the V-8 offers superior acceleration. Additionally, a stronger T-15 three-speed or T-18 four-speed transmission fronted a Dana 20 T-case.

The rear axle was a Dana 44 with centered diff and 30-spline axleshafts, and the front was an open-knuckle Dana 30 that offered a much tighter turning radius than the previously offered closed-knuckle Dana 27 or Dana 25 axles. Furthermore, you could have factory power brakes and either manual or power steering with a frame-mounted Saginaw steering box that replaced the cumbersome and complicated Ross Cam & Lever steering of the ’71-earlier CJs. In all, these “intermediate” CJs and their Commando counterparts are the best way to gain many modern mechanical conveniences within a vehicle that is still most definitely classic vintage Jeep.

While the 1972-1975 intermediate Jeeps offered some of the best mechanically sorted components in the classic Jeep lineage, the 1976-1986 CJs offered some of the weirdest, if not, worst in terms of quality and durability. So why am I suggesting every Jeep enthusiast should own one of these? I think for no other reason than to showcase how CJs remained loved by throngs of devotees during this period despite being so mechanically frustrating. It’s sort of like the unconditional love you might show a dog even though it continually pees on the carpet, barfs on your couch cushions, and poops on your bed.

Mechanically, it seems AMC was throwing whatever wasn’t selling well on other lineups at the CJ maybe because they thought they couldn’t hurt sales no matter how bad things were. While the 258, 304, 360, and even 401 engines and the auto transmissions that backed them were good, the fuel systems were butchered to meet ever more stringent EPA requirements, with the last CJs saddled with horrendously inefficient and problematic electronically controlled carburetors that often go foul. Certain manual transmission offerings were lackluster, and time between needing rebuilds was short.

Poor welding quality on the frames, steering box mounts that snapped, spring and shackle hangers that would crack off the frame, two-piece Model 20 axleshafts stuffed in a weak and flexible housing, poor electrical systems, and more are the stuff of nightmares for the non-mechanically inclined. But for those with an itch to upgrade and modify, these shortcomings also offer a great incentive and excuse to personalize your early CJ to meet your on- and off-road needs, and at the end of the day, it’s still a Jeep. The top comes off, the doors can be left at home, and you’ll become one with your mechanical horse, enjoying nature or the open road together.

When the military needed a five-quarter-ton pickup, Kaiser took its Gladiator, lopped off the roof, added a fold-down windshield frame and huge, thick steel fender flares, and installed some unique military features like a 24-volt electrical system, lift lugs on the Dana 60 front and Dana 70 rear axle, and a thick, burly bed. The 230-cube OHV inline-six engine got a bad rep for reliability, mostly because of the engine’s dislike of high rpms that wasn’t helped by the lack of an overdrive gear on the T-98 transmission and 5.87 axle gears. A burly divorce-mounted NP200 T-case offered a 1.96:1 Low and was tucked high enough in the chassis where high-centering with the truck’s ample 126-inch wheelbase wasn’t an issue. The M-715s ride like a tank thanks to their 1 ¼-ton load rating, but they’re pull anything, haul whatever you want, and turn heads anywhere you take ’em.