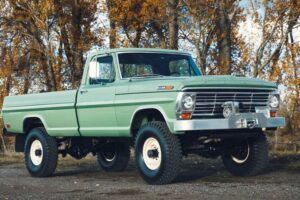 Vintage F-Series Ford trucks have never been the first choice for a restomod. The Chevy C10 has a larger catalog for engine, body, and suspension parts, and the small-block Chevy is cheaper and more common than Ford’s early V-8 engines.

Times are changing as builders and manufacturers discover 1967-72 fifth-generation Ford F-100 and F-250 trucks. Like the Chevy, these trucks were equipped with nice things like A/C, trim and interior packages, and the speed-friendly 390 FE and 302 V-8 engines added later in the production run. Trucks were becoming more car-like, and because they were rear-wheel-drive and V-8 powered, they were also becoming musclecar-like.

Jim Nygard knew this in 1976 when he was driving by a field in northern Minnesota and spotted a Rangoon Red 1968 F-250 4×4 parked outside. It was in decent shape, with a seized 360 from a drain plug incident, and only 37,000 miles on the odometer. Jim towed it down the interstate with a rope to his dad’s shop where he wasted no time taking it apart.

In four years, Jim took the body off the frame and treated it with zinc chromate, swapped the 360 for a 390 FE out of a 1967 Mustang GT, and rebuilt the four-speed transmission. You could still get NOS parts from Ford in the ’70s and early ’80s so the rebuild featured 100-percent OE parts. After the body was gapped and blocked, it was painted Boxwood Green using DuPont Lucite lacquer. It was a part-time driver for two years before the truck sat in various garages and barns while Jim put together a life.

In 2012, after 23 years of storage, Jim backed the beast out into the sunlight only to realize that the brakes had failed. He drove it back into the garage where it sat for another two years. Finally, in 2014, Jim pulled the truck back out, repaired the brakes, and took a good look at the 427 block that had been sitting next to it since the 1990s.

Jim sent the NOS 427 and other ancillary parts like rods and valvetrain components to Barry Rabotnik at Survival Motorsports for a rebuild. Using a 428 crank, Barry created a 450-inch combo that makes 550-575 hp using Survival’s FElony heads, a 234/240 at 0.050 hydraulic roller cam, and 10.3:1 compression. Over the next few years, Jim repainted some body parts that were showing their age and swapped in the 427, adding an Edelbrock Performer RPM manifold, a Mallory ignition, and a Holley four-barrel carb.

When you look closely in the photo gallery, you can see all the original parts that Jim has hoarded over the years and added to the truck. He took care to point out the NOS dome light switch and other priceless bits that really show the care and attention paid to this build. When we saw the truck at a car show in Montana, it was freshly-sorted and finally the way Jim wanted it (maybe). Today, the truck has its own place in the garage and only comes out in the summer for car shows and events.